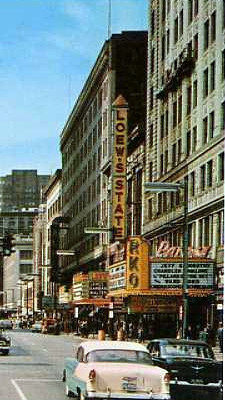 One of a set of two theatres occupying the Loew’s Building on Euclid Avenue (the other being the Ohio Theatre), the State Theatre obviously, was built for the Loew’s circuit, opening on February 7, 1921, and, like the Ohio Theatre, was designed by noted architect Thomas W. Lamb. The unusual configuration of the State Theatre and the adjacent Ohio Theatre is the result of some unusual occurrences. By 1920, several entities were looking to build flagship theatres in downtown Cleveland, and zeroing in on Euclid Avenue & E. 17th Street. Real estate magnet Joseph Laronge teamed up with Marcus Loew and eyed a large parcel of land on Euclid Avenue adjacent to the recently completed Bulkley Building, which housed the 3,000-seat Allen Theatre. However they were beaten to the punch by Edward Albee who bought a large corner lot leaving just 85 feet of street frontage leading back to the large parcel of land fronting E. 17th Street. Laronge was unfazed however, and not wanting to settle for a side-street address, he built the world’s longest theatre lobbies (just over 300 feet), and built the State theatre on E. 17th Street, and the adjacent Ohio Theatre, both with entrances on Euclid Avenue in the small gap.

The enormous lobby’s were a palatial as the auditoriums, and Loew’s State Theatre lobby featured a landmark series of Modernist murals by the famed James Daughtry, entitled “The Spirit of Cinema America”. Loew’s State Theatre was equipped with a Moeller 3 manual organ with 56 registers. The Loew’s State Theatre operated as a vaudeville and movie house, turning primarily to movies only after the 1930’s. The State Theatre closed the same week as the Ohio Theatre, in early-1969.

Like the Ohio Theatre, while it was closed, the State Theatre fell into serious disrepair, with holes in the auditorium’s roof opening the theatre to the elements, destroying a great deal of its original décor. Furthermore, in the early-1970’s, the seats from both theatres were removed and sold in an auction.

In 1977, the Loew’s Building was acquired by Cuyahoga County, and the next year, added to the National Register of Historic Places. The State Theatre was the second of the Playhouse Square theatres to be restored (the Ohio Theatre was the first). It was reopened as a beautiful performing arts center in 1983, and boasting an enormous new state-of-the -art stage-house, one of the largest in the country. One major highlight was the restoration of the Daughtry murals. Around 2017, the auditorium was repainted in its original color scheme to restore it to its original appearance.

Since its restoration, bringing much of the 1920’s appearance back to this moderate-sized theatre, the State Theatre is now used for cabaret-style performances, concerts and comedy acts.

Some action at the State:

‘Wicked’ witch wins battle of nerves over screaming woman in the crowd By Tony Brown, The Plain Dealer December 10, 2009, 7:00AM

Merideth Kaye Clark went out there an understudy. She came back a tough cookie.

And a showbiz disaster became a “beautiful theatrical moment, and the actors onstage and the 2,700 people in the audience shared something.” That’s how Clark recalled it all Wednesday.

On Tuesday night, in the midst of the quietest moment in the hugely popular Broadway tour of “Wicked” at the State Theatre in PlayhouseSquare, a drunken, obscenity-filled brawl broke out in the audience, tour manager Steve Quinn said.

Clark, a standby filling in as Elphaba, the green witch, had to make a quick decision as police and others scuffled with — and eventually handcuffed and forcibly removed — a screaming woman in the audience, Quinn said.

Clark could have followed Hugh Jackman and Patti LuPone, who recently stopped shows when cell phones rang in the audience. Instead, Clark sang the sad, beautiful “I’m Not That Girl” despite the increasing volume and invective, until the perpetrator was dragged out kicking.

As Clark sang the last notes in the newly minted silence, the audience rose to give her an ovation that “felt like a whole minute, and I guess I kind of took a bow. It was very magical.”

As for the other woman in the tale, Cleveland police identified her as Kathleen Holmes, 49, of Rock Creek. She was charged with two misdemeanors, and would have been released if she hadn’t attacked the booking officer, police said. She was charged with felonious assault and was in jail Wednesday night.

Holmes will get her chance to sing this morning, when she’s due to be in the audience of a judge.

SAD. But not surprising considering how inconsiderate people are in public anymore……..

Just wondering as Loews had these two theatres in the same building if they shared the same Manager or did both theatres have seperate Manager and staff. When I worked for Loews I got moved around a lot but the theatres were not right next door to each other.

As I recall during the 50s when I was in Cleveland, 1 person managed both theaters as well as the Loews Stillman which was down the street a few blocks. I would assume that maybe each theater had an assistant manager. Anyone know for sure?

Thanks Chas and Chuck, In Nashville our City Manager had his office upstairs in the Crescent building but he was also the Manager of that theatre and had an Asst,Me most of the time,the others 2 theatres had their own Manager and Asst.Rein Rabakuk was our District Manager based out of Dallas he would visit our theatres about once a month with or City Manager Robert “BoB” Sokol.t was funny he would only stay about 15 minutes at each theatre and be gone.

Sorry that sould be, with our City Manager, not with or City Manager.Also when I was the Manager at the Loews Melrose I was in the lobby of the theatre one afternoon when I heard the pay phone ringing so I picked up the phone and it was Rein Rabakuk calling from Dallas to tell me to fire my Asst. Manager. I thought this was strange as the theatre was not open in the afternoon then,and how did he know I was even there.Anyway when my Asst.came in that night and saw me there in my suit that night,I was off most Friday Nights but had to go to the bank and do the checks and send out the weekly reports, I would wear my street clothes, and he would run the theatre that night,he knew something was up,and I had to give him the bad news.Sorry I am of topic,now back to the State Theatre.

Click here for an exterior view of the Loew’s State Theatre in 1931.

Does anyone have a listing of movies that played the State Theater? I’m particularly interested in the period from the late 1950’s until their closing in 1969.