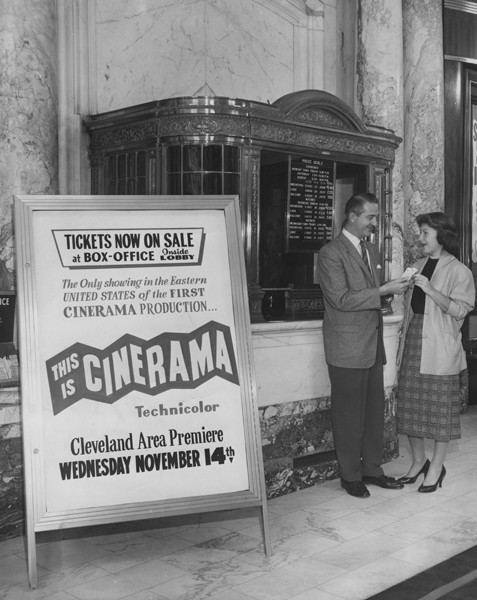 Built by E.F. Albee as a showplace for the Keith circuit. Keith’s Palace Theatre was costed at $2 million. This palatial vaudeville theatre opened on November 6, 1922 with a seating capacity of 2,530. It was equipped with a Wurlitzer 3 manual 15 ranks organ. It later made the switch to movies.

It is still part of the Playhouse Square group and remains a live theatre and performing arts venue to this day. By 2022 it had been renamed Connor Palace Theatre, operating with 2,800-seats. When the ‘classic movies’ series are presented, the huge screen is 47ft wide and 20ft high.

There is an excellent 1928 photo of the Palace on the Historic-Memphis.com website’s Theatre page. Here’s a link to the page.

1945 RKO Palace Theater had all the big bands playing as they came up from the basement to the stage. Kay Ballard was the head usherette and she use to practice singing in the shower in the usherette changing room on the 4th floor and I was an usherette when I was 16. I heard them all. Tommy and Jimmy Dorsey, Harry James, Glen Millen…and all the others. We had uniforms professionally made just for us. Every Thursday, each band leader met 3 usherettes with the manager next door at a soda fountain and they autographed 8 x 10 glossies for us by name. Of course, I was too young to realize the importance. They got ruined in the attic. I had over 20 of them.

There was a new band every week and played twice each day after a movie.

1956 photo added courtesy of the AmeriCar The Beautiful Facebook page.

Loews didn’t do 70mm at the Cedar Center, they butchered the place soon after taking it over in the late 70s by dividing it in half and installing those hated game machines and tile floors in the once-beautiful lobby. As with Loews East and Loews West, both equipped with 70mm and mag stereo equipment, Herb Brown, the Loews DM at the time, wasn’t interested in 70mm and had the RCA technicians set up for only 35mm mono operation after the auditoriums were split. The original operator, National General Corp., did a lot of 70mm at what was then called the Fox Cedar Center.

Besides the Cinerama engagements the Palace was also home to reserved seat runs of SPARTACUS, PORGY AND BESS and CAN-CAN. Too bad they tore off the spectacular neon and light bulb marquee in the restoration. It was the greatest movie marquee in Cleveland. They must think the new one is more “tasteful” but the 1950s one was really dazzling.

The old marquee was featured prominently in the open for the Hoolihan and Big Chuck Show on WJW TV when that tv station studio was at 1630 Euclid Ave.