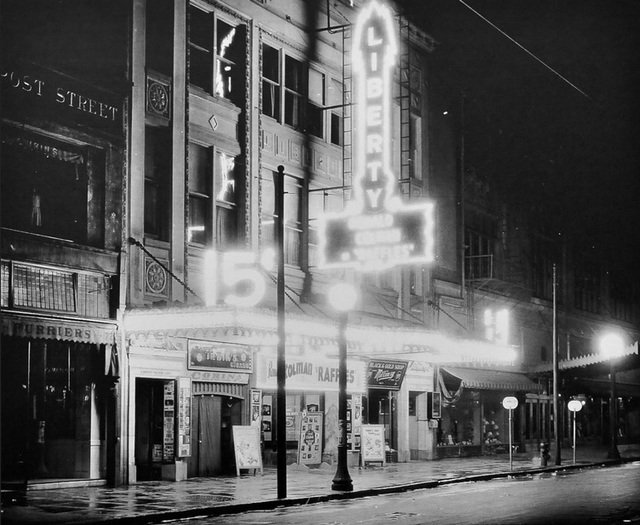 The Spokane Daily Chronicle archives say that the Liberty Theatre was built in 1914 at a cost of $150,000 by the Liberty Amusement Company, owned by L.W. Hutton. It was designed by architect Francis P. Rooney and opened on January 25, 1915. When it was operated by Spokane Theaters, Inc. it gave Seattle on April 8, 1927 the first Vitaphone production, “Don Juan.” On December 30, 1927 after a $100,000 remodeling and redecoration to the plans of architect Francis P. Rooney in a Hindu style, it opened as Grombacher’s New Liberty Theatre. The premiere attraction was Spokane’s first talkie “The Jazz Singer".

Later operators in the 1930’s included Principal Theaters and then Evergreen State Amusement Corp. In 1947 it was acquired by Gamble Theaters who later sold it to Favorite Theatres who put it under their banner in newspaper listings in October of 1948. The Film Daily Yearbook of 1951-53 lists the Liberty Theatre with 900 seats.

The Spokane Spokesman-Review announced on July 2, 1952 that Lerner Stores had taken a 35-year lease on the Liberty Theater property. Lerner’s was planning on remodeling the theatre to make room for a new store after the Liberty Theatre lease expired on July 1, 1954.

While being operated by Favorite Theaters it dropped out of the theatre listings on June 27, 1954, leaving Spokane with nine indoor theatres. In 1955 a Lerner Store opened in the old Liberty Theatre and remained in business until 1992. Since 2009 it has been home to Gibliano Brothers, a popular piano bar.

The January 26, 1915, issue of the Spokane Spokesman Review had an article about the opening of the Liberty Theatre, which had taken place the previous night. The article is accompanied by three interior photos of the new theater.

A somewhat clearer photo of the auditorium from the stage, dated 1925, can be seen here, from the Northwest Museum of Arts and Culture.

Exterior photos of the Liberty can be seen on this page from the Puget Sound Theatre Organ Society web site.

If the piano bar is where the cinema used to be it looks like a different building. Cinema demolished or refaced maybe?