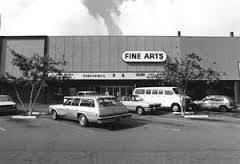 The Fine Arts Theatre opened in 1964 showing art films. In the mid-1970s, it began showing pornographic films. In 1979, Landmark took over management of the theatre and screened foreign and art films. It was closed in March 1986.

The building and the the shopping center it was located in was demolished as part of a redevelopment project for the center.

The Fine Arts outlasted the Roxy (on Cass St.) by several years, and to this day, Pacific Beach has no cinema at all. It was a simple hall of a theater, but who would have thought at the time that it would have constituted such a loss for our community.

Landmark Theaters of Los Angeles operates the 500-seat Fine Arts, which specializes in foreign films. In the Pacific Plaza shopping center, the 22-year-old theater has fallen victim to the center’s redevelopment plans, which call for more small retail stores. The wing housing the theater building will be demolished and is not likely to be replaced, said Bill Tribolet, vice president of Collins Development Corp.

“There’s a greater need for smaller retail stores in the beach area … and theaters typically aren’t open during the day,” Tribolet said. The parking spaces required by movie theaters for lengthy periods also conflict with the short-term parking needs of most retail establishments, Tribolet said.

Landmark, which also operates the Ken Cinema in Kensington, the Guild Theatre in Hillcrest and the Cove Theatre in La Jolla, took over the Fine Arts in 1979. The company is looking at other vacant theaters in San Diego, including the downtown Broadway Playhouse.

The immediate effect of the Fine Arts' closing will be a change in programming at the Ken, Richardson said. The Ken normally shows double features that change daily. “You will probably see more one- or two-week runs of foreign films or fine art films. There’s a lot of good product available.”

Richardson said the chain will try to absorb the Fine Arts' staff at its other theaters. “I feel particularly sorry for our janitor, who’s been there 15 or 20 years,” he said.

The Fine Arts opened in 1964, showing art films. In the mid-1970s, the fare shifted to pornography, until the Landmark takeover.

The Fine Arts is the only movie house in Pacific Beach. Based on current retail trends, Tribolet indicated that it may be the beach community’s last.

I used to go to this theatre a lot — more eclectic selection in the mid-late 70s than the Ken and other rep houses (and not affiliated with Landmark, a 3 (?) screen operation at the time (LA, San Diego, and Berkeley I believe).

Classic narrow long lobby as I remember and it was a little shabby around the edges. No balcony. What I wouldn’t give to have one of those old calendars to frame on my wall.