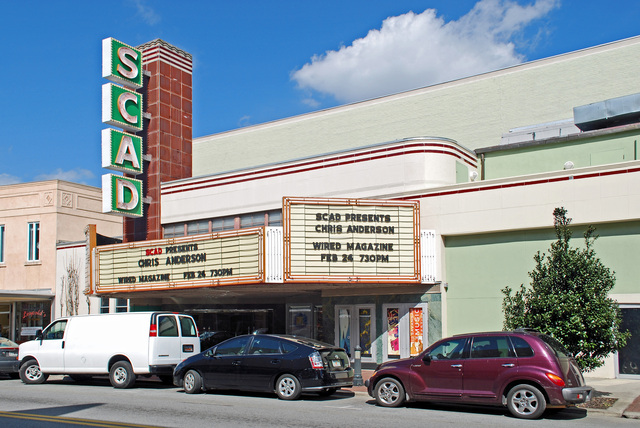 Designed by architects Tucker & Howell as the Weis Theater, this Art Moderne style 28,296-square-foot building was opened in 1946 by the Weis family, which also operated the Savannah, Roxy and East Side Theaters in Savannah and the Bibb Theater in Macon. This theater, with seating for over 1,100 on its main floor and balcony, featured live entertainment in addition to movies. The Weis Theater closed in 1980.

Later acquired by the Savannah College of Art and Design (SCAD), the Weis was beautifully restored to its original appearance as a venue for both live performances, including concerts, and film and video screenings (including hosting the Savannah Film Festival since 1998).

Of course, one of its main uses is for the performing arts department of the college, including lectures, student performances (both live and on-screen), and fashion shows. The official name of the theater is now the Trustees Theater.

The theater diagionally across Broughton was the Avon. The theater was actually located across the lane behind the entrance building. The last time I was in Savannah it was demolished, and a parking garage had been built where the theater stood. The entrance building held the ticket booth and a concession stand and was just a walkway from Broughton Street through to the theater building. The building next door to the theatre (corner of Broughton and Abercorn) was a Woolworth’s. There also used to be an old lady who used to sit in front of the theater on a folding chair, using a cardboard box as a table, selling roasted peanuts every day. Thanks for the flashback…

I was born and raised in Savannah; left when I was 12 in 1963; I remember the AVON well. Dave M’s explanation helps me understand the set up much better; I remember crossing the alley. And the old lady I remember particularly well…not for the roasted peanuts, but for the BOILED peanuts she used to sell. Here’s another question: history of the old STATE THEATER that was across Broughton from the AVON; I seem to remember its concession stand was outdoors. By the time I was old enough to start going to movies on Saturdays, it was demolished.

This page still needs updated for the new website (which has a history section and a dandy photo gallery) that Lost memory linked to on May 3, and to include the architectural firm of Tucker & Howells (currently misidentified as Howell and Tucker in the intro.)

Nice shots of the WEIS/SCAD Theatre.

I took seven pictures and a short video of the marquee in December 2010. The pictures and video are visible here.

I remember this theatre across from levy’s department store adjacent to the f.w. Woolworth store and the avon and lucas on the same block. I remember the posters I think there were four or five. I can remember them showing Geronimo lady and the tramp it happened at the world’s fair the interns and help. I remember a giant poster of kitten with a whip down a little bit on the outside. I saw Dracula has risen from the grave and they had a coffin out front. later they featured Blaxploitation and kung fu movies. the box office was in a booth in the front and the concession stand inside. smell that popcorn ah memories.

Link about the upcoming Savannah Film Festival. Photo will enlarge.