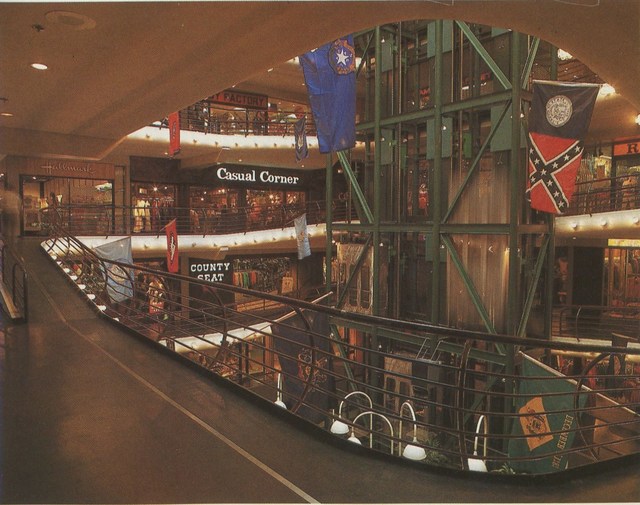 Opened as the Diversey Theatre on July 30, 1925 at the busy intersection of N. Clark Street and W. Diversey Street in Lakeview. It was designed in Spanish Baroque style by architect Edward Eichenbaum of the firm of Levy & Klein, whose work also included the Granada Theatre in Rogers Park and the Marbro Theatre in Garfield Park. The interior of the theatre was remodeled by Publix Theatres in the Art Deco style, reopening February 7, 1930 with Jack Holt in “Flight”. It was renamed the Century Theatre, in honor of the Century of Progress World’s Fair that was held in Chicago during 1933 and 1934.

In 1973, the Century Theatre was closed, the interior was completely gutted, and the theatre was rebuilt as the Century Shopping Centre, a multi-level shopping mall.

On March 31, 2000, the struggling mall gave its uppermost levels over, ironically, to a new seven-screen art house cinema, operated by the Landmark Theatres chain. The small auditoriums were decorated in a neo-Art Deco style, and the ornate Baroque terra-cotta facade was cleaned and restored and given new signage.

Also, I didn’t think about the booth problem. It very well could be small.

I hear the Music Box will screen it again in 70mm in January. And that’s okay, but the screen is so small that it really doesn’t do 70mm justice. Do they even have a proper cinemascope screen?

I basically agree Cinemark fan; however, I think certain theaters – such as the Dome, the Seattle Cinerama, the Music Box, the Castro, the AFI Silver, and some others basically serve their cities in some respects as a film historical center, something akin to the Pictureville Cinema in Bradford, England and need to have these multiple projection capabilities on an ongoing basis because of the nature of their programming.

I admit that the Austin situation might appear to show that new 70mm installations would work, but I would speculate that the new installation there is largely due to the fact that this growing chain is run by an film enthusiast with a special love for Austin, has a fairly distinctive business model, a film production arm, and other characteristics far away from from a chain like AMC or even Landmark; that particular situation situation may not be all that typical or comparable. (I think it unlikely that the other franchises that are a part of the Drafthouse group will follow suit in installing 70mm). In addition, Austin has benefited from 70mm showings at their still 70mm-equipped Paramount over the years, so most likely there is an appreciation for the format there perhaps somewhat out of proportion to the city’s size.

That I said, I certainly agree that Chicago ought to have, shall I say, a mainstream commercial venue with a large (hopefully curved) screen where, when something like this situation involving “The Master” arises, can quickly be convert to a premiere 70mm venue. In some ways, the Music Box does or could serve the role, but at least in this instance, it appears it could not be arranged, and, as you noted, this theater, built well before the wide-screen era, cannot provide the full 70mm experience. It is a crying shame, when one thinks of all the venues both in the Loop or in the Chicago suburbs that once were 70mm capable, that only Music Box appears to remain. It clearly a very special niche in Chicago, but obviously only runs 70mm film occasionally.

Another sad reality that militates against new 70mm installations, even for revival showings, is that good quality 70mm prints, even of classic titles, are increasingly hard to acquire, and studios, if they are interested at all in maintaining access to classic films shot in 70mm, would rather make digital restorations than strike new 70mm prints.

Even the Dome cannot run some existing 70mm prints of some titles because the print sources, in some cases, will not allow the prints to run off a platter system, and the Dome at present cannot run 70mm without using a platter. In addition, there are fewer and fewer skilled projectionists who really know how to run 70mm film properly, especially if it has to be shown on a changeover basis.

Finally, even if a few films are shot in 70mm now and in the future, there is no guarantee that they will be projected that way; look at what is happening with “Samsara”. There is not much incentive to install a 70mm projector (and all that goes with it) if there is not going to be a regular flow of product. Lack of regular product is one factor (surely not the only one) that contributed to the demise of Cinerama and the original Todd-AO.

I saw THE MASTER on August 16 at the Music Box in 70mm. It was presented in 1.85; Datasat Sound. It filled up a good portion of the proscenium.

The historic facade of the Century is in jeopardy, as the owners want to remove it and replace it with windows. It isn’t landmarked. DNAInfo story here.

Look at the photos! How many more windows does it need?Seems to me it already has plenty of windows?

I remember going to the Century Center back in the late 1980’s. The Theater sits on what use to be a Bally Total Fitness center. It had a 75' long swimming pool and the biggest Whirlpool. It could fit 25 people. I always thought it was cool to see a place like that on the 6th floor of a mall. Now the fitness center is all on the first floor. I’m gonna have to pay this theater a visit.

Lubliner & Trinz built the Diversey Theatre, which first opened on July 30th, 1925, with stage and screen presentations of “Loop” quality. In December, 1929, Balaban & Katz took a six-year lease, at an annual rental of $56,000. After spending $50,000 on renovations, B&K re-opened the theatre with movies only, under the new name of Century, on February 7th, 1930.

Comfortable Cool- I know this is an old post so if you by chance stumble upon this comment as I did this site looking for a pic of one of my great grandmothers theatres, she was a Lubiner. Are you related to the family or just know a lot about the history of old cinemas/theatres given the site? Very cool to stumble upon your comment scrolling the page and also accurate. :)

Saul Smaizys circa 1970 photo of the Balaban & Katz marquee on Flickr.