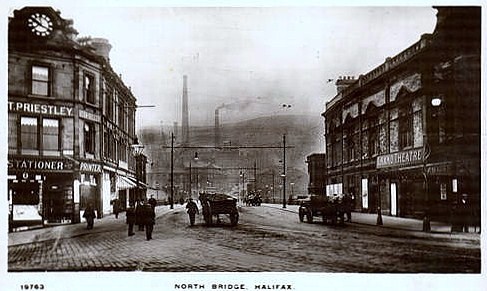 Located in Halifax, West Yorkshire on North Bridge at the corner of North Bridge Street. Built on the site of the Gaiety Theatre, which was a wooden building. The Grand Theatre and Opera House was opened on 5th August 1889 with Wilson Barrett in “Claudian”. Designed by noted theatre architect Frank Matcham, seating was provided in orchestra stalls, dress circle and upper circle, with two stage boxes and six private boxes. The proscenium was 28 feet wide. Interior decorations were by Mr J. Binns of Kings Cross, London.

In 1896, it was taken over by Northern Theatre Co. Ltd., and from 1903 became a variety theatre. From 22nd May 1911, and for the summer season it became the Grand Picture Theatre. Films were then shown as part of the variety programme until 1925.

From 1st June 1925, it was converted into a full time cinema, known as the Grand Picture House, opening with Mae Bush in “The Lady Secretary”. It had rear projection, from a projection box built on the stage. By 1944 it had been re-named Grand Cinema. Still operating in 1954, it was soon closed as a cinema, and was taken over briefly by the Halifax Theatre Repertory Company. The Grand Theatre was closed on 24th May 1956, and was demolished in 1958. The site is now used for car parking for a car and van hire company, with the lower section of the rear wall of the theatre surviving.