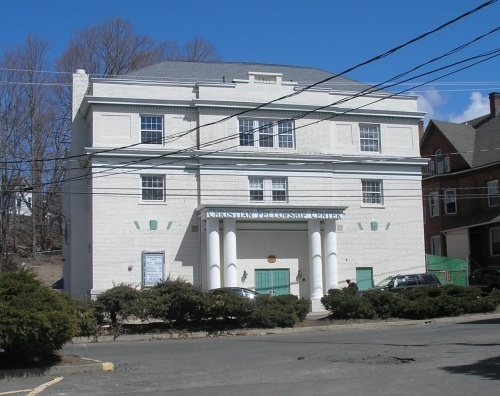 Carberry Theatre opened in 1940 in the renovated Redman’s Hall which was constructed in 1911. It is currently a church.

Boxoffice indicates that this house opened in 1941. The December 8, 1940, issue of the magazine said: “Joe Faith of Terryville, Unionville, and Collinsville, will be ready to open his 700-seat theatre in Bristol in February… The house is being converted from a meeting hall.” The opening was delayed, though, and the March 15 issue of Boxoffice said the opening was scheduled for Wednesday of that week. In this item the seating was given as 650.

In 1945 and 1946 there are Boxoffice items saying that Joe Faith was presenting Vaudeville-film combination shows at the Carberry. These were mostly one-night-weekly events, booked into the house by a Hartford bureau run by Jack Gordon.

On January 15, 1955, Boxoffice reported that CinemaScope equipment had been installed in the Carberry, but the end was near. Joe Faith shuttered the Carberry in 1956, according to Boxoffice of August 4 that year. Later issues of Boxoffice indicate that the house remained dark for several years. A July 11, 1960, Boxoffice item about the closing of the Bristol Theater said that the Carberry had then been shuttered for four years.

The January 29, 1962, issue of Boxoffice carried a report that a Stanley-Warner subsidiary had purchased the Carberry from the Faith estate and planned to remodel and reopen the house. Boxoffice of February 4, 1963, included the Carberry on a list of theaters remodeled and reopened the previous year, but I’ve found no other items about the house during this period, nor any indication of how long it continued in operation.

The Carberry remained open through 1979.

The web site Historic Buildings of Connecticut says that the Redman’s Hall was designed by architect Walter P. Crabtree.