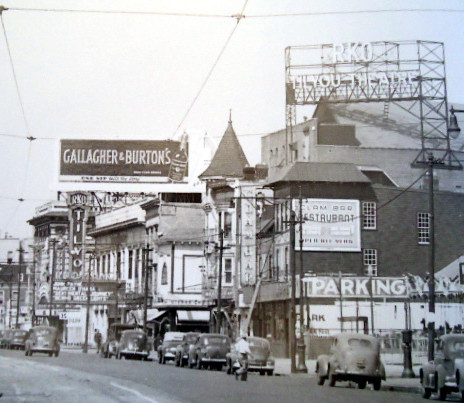 This grand old theatre had its heyday in the golden era of Coney Island. It stood one block away from the Shore Theatre and Steeplechase Park, all on Surf Avenue. The Tilyou Theatre was opened by B.S. Moss on March 18, 1926. it was equipped with a 3 manual Wurlitzer organ.

In its twilight, it was running action double features at bargain prices and was closed in early-1968. It was was demolished in 1973. A parking lot now occupies the site.

George Tilyou owned the Million Dollar Pier in Atlantic City. I’m sure he had his hand in a few other enterprises as well.

Clay Cole is retired and lives on an island off the Cape Fear River on the Atlantic Ocean on the North Carolina coast. I still till this day remember seeing King Kong Vs Godzilla there and only a few years later there was a vacant lot that as far as I know is still vacant.

Clay Cole died at 72 of a heart attack on December 10, 2010 at his home in North Carolina. His last public appearance was at the Friends of Old Time Radio Convention in October 2010.

I wonder if this theater was related to George Tilyou’s Steeplechase Park which must have been right near it.

I would have thought it was named because of the proximity to the park rather than any actual relationship. Always remember looking towards it while waiting to get on some of the rides in the park.

The theatre Was named fr the Tilyou family who were major land owners in Coney Island. George died in 1914 age 52. The park closed for good on Sept 20 1964 and never reopened. Coney Island was declining and crime was rising and a good deal of businesses shut down or move and the RKO Tilyou was collateral damage.

Just added a “new” 1941 photo of the RKO Tilyou, gleaned from the marvelous NYC Tax Photo collection, which was digitized and released in Nov., 2018.