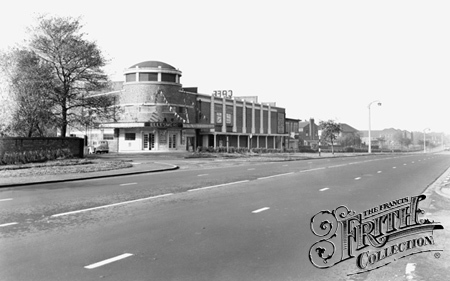 Located in Swinton to the northwest of Manchester. The Ellesmere Super Cinema was opened around 1935. It was operated by the Snape & Ward circuit from 1936, and by 1963 it was operated by the G.B. Snape Group of Assoc. Cinema Companies chain who to operated it for the remainder of its life. The cinema had a café.

The Ellesmere Super Cinema was closed in the late-1960’s. It was demolished as a Premier Inn was built on the site, now re-named Hello Hotel.

The Ellesmere was not, actually, in Swinton but in Worsley, on the opposite side of the A580, East Lancashire Road. Built close to the main crossroads where Swinton, Pendlebury, Worsley and Monton (Eccles) meet, it had a large catchment area. Whilst each of those towns had their own cinemas, none were as large and well appointed as ‘The Ellesmere.’

Operated by G.B. Snape, as written above, it was actually part of Snape’s Cinema Circuits, who had their headquarters in a large, converted house in nearby Pendlebury. The Ellesmere was, in fact, their closest ‘house.’

The note, above, ‘The cinema had a cafe.’ is something of an understatement. Whilst the cinema did, indeed, have a cafe, it also had so much more:

G.B. Snape not only owned the Cinema and Bingo chain, he also owned Salford Rugby Club, along with its attached restaurant and nightclub, ‘The Willows,’ which was part of his ‘Stanneylands Restaurants’ chain. A very upmarket brand whose main branch was on Stannylands Road, Wilmslow. Other branches were spread throughout the more select areas of Manchester and Cheshire.

One such, fully licenced, Stannylands Restaurant was built, directly onto the right hand side of The Ellesmere Cinema. It was a large, semi-circular, opulent affair, with panoramic windows, its own entrance and car-park. There was also an entrance directly from within the cinema. Combination tickets could be purchased, which included both the cinema presentation and a table in the restaurant after the show.

It was Snape’s premier house, and it was a sad day when it was demolished to be replaced by a Premier Inn. The restaurant licence continued to be capitalised upon by the motel’s attached, canal themed gastro- pub, The Narrow Boat, later renamed ‘The Ellesmere.’ And, so, the name had returned, albeit temporarily. That building remains, in 2020, but now re-branded as a ‘Hello Hotel’ with ‘Albert’s’ restaurant and bar.