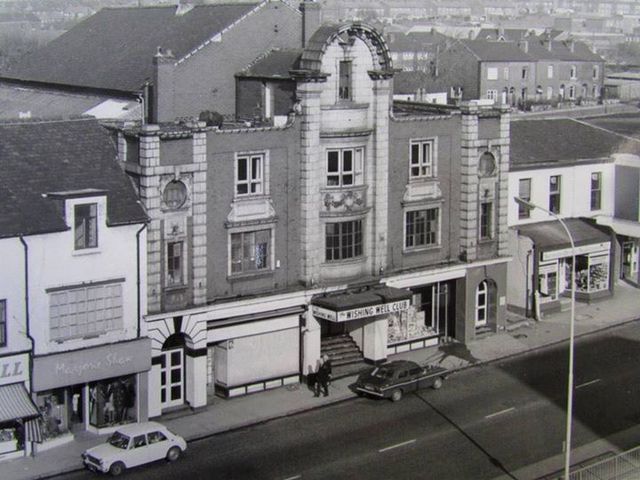 In the Manchester suburb of Swinton, the Plaza Cinema does not appear in the 1914 Kinematograph Year Book, but it is listed on the 1931 edition, albeit saying only that it was booked by J. F. Emery Circuit at 26 Cross Street, Manchester.

By 1940 the owner was Swinton Entertainments Ltd., although Mr Emery still took care of the bookings and his circuit operated the Plaza Cinema until 1957. The cinema then had 765 seats, a proscenium width of 24ft and there was a dance hall attached.

The 1953 Kine Year Book showed the seating capacity had reduced to 635. The Plaza Cinema was closed by 1963.

The cinema and dance hall appear to have been at first floor level, with shops on the ground floor. At some stage, possibly in the 1960’s (see photographs) it was the Wishing Well Club. When I visited, in August 2001, the building was closed up, albeit that at least one of the shops was in use.

However, in September 2014 it re-opened as The Grand Palais, a superb wedding & celebration venue, ballroom and concert venue, owner Stephen Johnson having spent 15 years renovating the building. It is not known how much, if anything, survives of the former cinema.