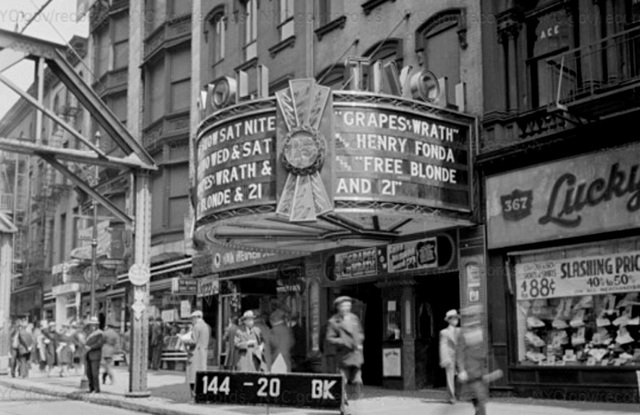 This theatre once stood on Fulton Street in the downtown Boro Hall section of Brooklyn. It had previously been Hyde & Behman’s Theatre, and later the Olympic Theatre. The Tivoli Theatre opened on February 8, 1927 with Jean Hersholt in “The Wrong Mr. Wright” plus vaudeville on the stage. It was equipped with a Moller 3 manual, 14 rank organ, which had been installed in the Olympic Theatre in 1926. From September 1942, it was part of the Century Theaters circuit. By 1950 it was operated by Liggett-Florin Booking Service.

The Tivoli Theatre was closed in 1952, and was damaged by a fire on August 30, 1954, and was subsequently demolished.

I was able to visit this sight earlier today. Based on what I saw, I will qualify – but not change – the conclusion that I made in my recent comment that the picture recently provided by Warren and J.F. Lundy depicts the Tivoli.

As a first point, I was wrong in stating that Washington St. was situated somewhat to the east of the picture. In fact, the photographer probably took the shot at the very end – or was it the beginning – of this street. Since, however, Washington St. was laid out in a straight north-south direction directly aimed at – but never reaching – Borough Hall, it did not come in at an angle. On the other hand, this is exactly the course that Fulton St. took in the photograph, as it passed by Borough Hall and began its approach to Fulton Ferry. Thus, the picture depicts the Tivoli on Fulton St., just north of the end of Washington St., which ended its run at the Fulton st. intersection.

I know that it is difficult to recreate things that no longer exist, but I think I have gotten this right.

Hello John. I had originally thought as you , this based on my illusion that the theater in the photograph was nearer to Boro Hall then in fact it was. Nirenstein’s National Realty Maps, Fairchild Air Service Photos taken in the 1930’s, and photos taken from the building on the southeast of Joralemon and Court Sts. (where the old Corn Exchange Bank was located on the first floor), show that the theater in question is beyond Myrtle Avenue, while the Tivoli’s main entrance is south of Myrtle much nearer to the park by Boro Hall. There was actually a second entrance with marquee for the Tivoli on Myrtle Avenue between Adams and point where Fulton curved west and Washington began.an.

Kevin Walsh of Forgotten NY has just produced a map of this area that does validate Warren’s point. I have linked it, whith appears at the beginning of Kevin’s excellent survey of Myrtle Ave., at the bottom of this post.

In the photograph, the Tivoli would be just out of sight to the left. Since it was taken north of the Myrtle Ave. intersection, the street immediately in front of the photographer is, in fact, Washington St. Fulton literally crosses diagonally from southeast to northwest in the foreground. Given these facts, the theater appearing in the picture is on Washington St., and the Towne Theater is the only possible choice.

My error involved not realizing how near the Myrtle/Fulton intersection was to Borough Hall. But the map really clears things up.

So, sorry for doubting you Warren.

Having taken an even closer look at the map, I saw that it specifically identifies the Tivoli and shows it backing up on Adams St., the street one block east of Washington, with – as JF noted – one entrance on Myrtle Ave. The main, Fulton St. entrance was probably just below – or to the north – of the map. It was probably situated right across from Borough Hall and below the old el’s Borough Hall station.

Excellent map John. It shows everything in question very clearly. Thanks for posting the link.

I do not believe that this picture, circa 1928, of the Tivoli has been posted on this page before. In order to get the best results, you need to enlarge the initial picture. This will provide both an excellent view of the Tivoli’s facade as well as the surrounding streetscape. Hope the link works.

By the way, this attachment contains literally hundreeds of terrific photos and maps of old Fulton Street, including a number of other movie houses. It is worth an extended look.

Ridgewoodken; The original entrance to the Olympic Theatre was on Adams Street, and was moved to Fulton Street when the Tivoli Theatre opened in 1927.

On a recent repeat, George Burns mentioned playing this theater (as the Olympic) but getting the hook after only two days…