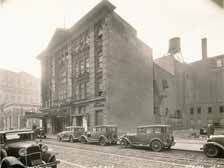 The Bijou Theatre opened November 13, 1893, as a playhouse under the direction of H.C. Kennedy. The opening production was “Adonis” starring Henry Dixey. Seating was provided for 2,000 with 700 in the orchestra, 500 in the balcony and 800 in the gallery. The proscenium was 36ft wide and there were 14 dressing rooms.

Due to its convenient location in downtown Brooklyn, the Bijou Theatre proved an instant success and soon became one of the most profitable theatres in the entire USA. When the ailing Kennedy retired in 1900, he sold the Bijou Theatre to Hyde & Behman, which operated it for a time and then leased to the Spooner Repertory Company. In 1908, Marcus Loew, encouraged by his success of his first Brooklyn theatre, the Royal Theatre, took over the Bijou Theatre and converted it to movies with vaudeville. Architect Thomas Lamb carried out some alterations in 1912.

Here is the pay New York Times link of the 1928 sounding of the death-knell for the Bijou.
View link

What do you mean? Bijou is one of the most common theatre names in American history.

There have been “Bijou” theatres in New York since the birth of film, four in Manhattan alone.