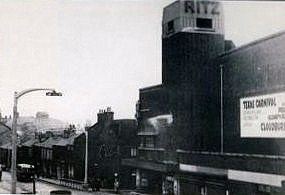 Located in the centre of Gateshead, Tyne & Wear, on High Street at the corner of Argyle Street (which no longer exists). (The address given here, 353 High Street is the closest to the original address and adjacent to where the cinema once stood). The Ritz Cinema was built for the Associated British Cinemas(ABC) chain and opened on 25th July 1938 with Greta Garbo in “Marie Waleska”. Designed by the Newcastle based architectural firm Percy L. Browne, Son & Harding. It had a brick facade, which included the side of the auditorium that ran parallel to Brunswick Street. The line of the facade was by a square tower feature at the entrance end of the building. Seating was provided in the auditorium for 1,214 in the stalls and 744 in the circle. There was a stage, which was used in the early days and up until August 1946 for Sunday big band concerts. (Films were not allowed to be shown on Sundays in Gateshead until 1946).

The Ritz Cinema was closed on 18th May 1968 with Dennis Waterman in “Up the Junction”. It had been purchased in a compulsory purchase order to build the A1 road viaduct, a scheme which also destroyed the nearby Essoldo Theatre.

Another exterior view of the Ritz Cinema.

I have uploaded a photo of the ABC Ritz taken from a different angle.

I have uploaded to the relevant section various interior shots of the Ritz including the projection box. This, like most North Eastern ABC’s, was not designed by in house architect, William Riddle Glen but by Percy L Brown & Harding of Newcastle. Other projects assigned to this company were the Regal Darlington (rebuild of C J Phipps' Theatre Royal), Forum Hartlepool, Ritz Wallsend, Savoy South Shields, Globe Stockton (not for ABC but acquired about a year after opening), Wallaw Blyth (for Walter Lawson but acquired by ABC in 1955). The latter two theatres bore many of the hallmarks of the ABC commissioned theatres and one could be forgiven for thinking that they were original circuit houses.

The only Glen theatre in the area was the Ritz Sunderland whilst others,namely the Haymarket Newcastle, Elite Middlesbrough, Coliseum Whitley Bay, Rex Consett, Olympia Newcastle *, Majestic Benwell * and Empire Stockton were acquired properties – not to forget the Essoldo Newcastle, of course!

There was a second theatre built for ABC in Hartlepool by Percy L Brown but, owing to the outbreak of WW2, it was never fitted out. This was the Comet Cinema, an unusual name for an ABC. At the end of hostilities the theatre was never opened and was used as a warehouse for most of its existence; a great pity as it looked from the outside like it would have been a very fine cinema. The keys were in the top drawer of the manager’s desk at the ABC Forum!

I remember passing the Ritz when its demolition was at an advanced stage and there were quads for ‘The Anniversary’ (Bette Davis) in the frames on the Front of House ; I therefore always assumed that it was the last feature shown.

The very last Manager at the Ritz was a lovely chap by the name of Jack Vasey who transferred to the ABC (Savoy) South Shields from here. He always said that the South Shields theatre , whilst smaller, reminded him very much of Gateshead Ritz.

The South Shields venue was to become my first full managererial appointment for ABC and the staff without exception all spoke in glowing terms of Mr Vasey.

I have uploaded what is probably the best ever exterior shot of the ABC RITZ Gateshead. The only slight let – down is the visible area where a 32 sheet frame had once been attached to the main elevation.

Terry The Kine Year book has a very large number of inaccuracies as there was always a delay of up to date details reaching the company From 1954 seen the reduction of seating capacities due to CinemaScope being installed. The is legal a requirement for the front row in relationship to the top of the screen of 35 degrees Which seems to be being ignored now. But Probably the Local Licensing department no longer employ people that know what they are doing

Hope you are keeping well. It is quite a while since we spoke on here!

I remember well the fact that the front row (at least) was removed from the stalls upon the installation of CinemaScope because of the different ratio and sight lines.

I originally phrased my entry with the additional words “….. where 82 extra seats would have materialised from, especially after the introduction of CinemaScope, is mystifying”

I then deleted these words as the Kine Year Book would have been published at the beginning of the year and ‘Scope at the Ritz was not installed until the end of November that year.

Some cinemas, as you recall, replaced the front stalls seats for live performances and they were only occupied during these stage shows. This does not explain the situation at Gateshead Ritz as at time of publication the front seats would not yet have been removed and in any case, as far as I know, it only presented Sunday Concerts during WW2 and , unlike Chester Regal and many other ABC’s where Pop Concerts and other live shows became regular events, such was not the case here. Even the Blacks Regal/Odeon, which was fully equipped, did not host such performances, presumably because of the proximity to Newcastle.

The Essoldo/Empire, however, did present an annual pantomime with quite well known names (Sandy Powell etc) as well as Amateur Operatic weeks.

I quite agree with you about Local Licensing Departments, Mike as, going by what I am told, all these multiplexes seem to flout the Cinematograph Acts with total impunity…