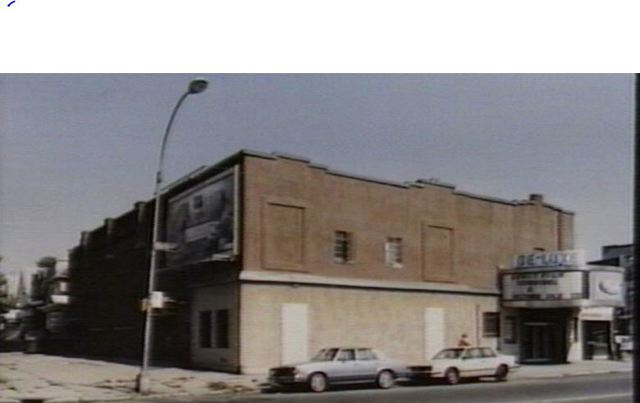 Opened as the Montauk Theatre in 1914 (it is listed in the 1914-1915 edition of American Motion Picture Directory as being located on Bath Beach, Brooklyn).

Bway, can you add that pic to the photo section?

For informational purposes, I found mention of a New Montauk elsewhere. However it never showed movies. But the theater it was to replace has a fascinating history since it was actually moved in one piece. See elsewhere on CT

I used to go her when I was 6 in 1940. Saturday was kids day and I saw a new western once a week. I went there for many years until we moved to California in 1948. My parents went there when second run movies were playing. I’ll never forget the Deluxe, it was only about six blocks from my home.

Uploaded a tax photo of the De-Luxe in the day.

The description should be changed to closing in the mid-1990’s not mid-1980’s. I distinctly remember seeing an article on the closing in our local paper (The Bay News) circa 94/95 about it’s shut down. Also there was a NYC law passed in 1995 that prohibited adult businesses operating within 500 feet of a school and since PS 200 was located about a block away the writing was on the wall for the De-Luxe Theatre.

Living in Brooklyn, in the mid 70’s the Deluxe was known as the the place to go and get off. Stright or gay it didn’t matter you got what you came for. No matter what time of the day it was the place always had a nice crowd.With the computer world we live in now, that type of venue sadly will never happen again.