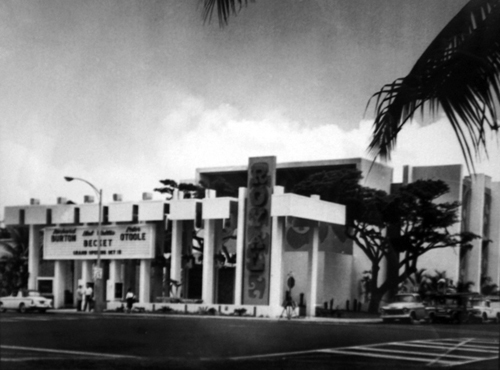 The Royal Theater was opened October 15, 1964 with Richard Burton & Peter O'Toole in “Becket”. Went to this theater in Waikiki a few times, as my grandmother, grandfather, uncle’s, and auntie’s lived in the same neighborhood for awhile. An all-you-can-eat restaurant now sits in its place, but the Royal Theater was also known for the banyan tree next to it, leading to what was the parking lot for the theater in the back.

According to a few websites, “the world premiere of "Hawaii Five-O” (was) shown at the Royal Theater on Oahu" on February 19th, 1968. This would be the pilot episode titled “Cocoon”, which started shooting on November 6, 1967. The reason for the showing was to present it to CBS executives, who chose to pick it up as a series.

This opened on October 15th, 1964. Grand opening ad in the photo section.