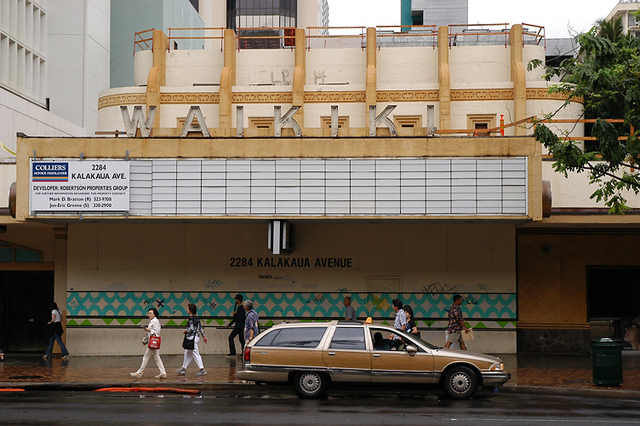 The Waikiki Theater opened August 20, 1936 with Ronald Colman in “Under Two Flags”. It was a single screen Atmospheric style theater. It was complete with (among other things) an artificial rainbow, tropical vegetation and coconut trees. Artificial clouds were also projected on a midnight-blue curved ceiling. In 1939, the Waikiki Theater was equipped with a Robert Morton theatre organ, which had originally been installed (with a twin console) in the Hawaii Theatre, Honolulu in 1929.

The change in name (to Waikiki Theater 3) occurring in 1969 when the twin Waikiki Theatrer’s 1 and 2 opened adjacent to the original theater. There has never been any physical connection between the buildings. The Waikiki 3 remained a single screen facility.

This theater closed in November 2002, and its grand organ was removed. Sadly, the Waikiki 3 was demolished in April of 2005.

I went through Hawaii on my way to Guam, in 2005, had to stay overnight,so I walked Kalakaua Ave looking at places we went to in the 1980s when we were stationed in Hawaii. This place was boarded up. Kalakaua Ave is much darker these days. At least I have my memories of these grand theaters.

Featured in this great Article by John Allen of High Performance Stereo.

A beautiful picture of the auditorium from 1983 upon completion of the HPS-4000 sound system. From HPS website.

Appears quickly in separate footage in the Season 12/1979 Hawaii Five-O episode “A Lion in the Streets,” during the opening credits, and appears to be showing Mark Robson’s 1968 film of Jacqueline Susann’s VALLEY OF THE DOLLS. There is no double-marquee, so this could not be the Waikiki 1 & 2; perhaps some previous stock footage not used until then (5-0 aficionados can confirm if the shot is re-used in another show.).

Should never have torn it down. If anything they should have remodeled it!

The front of this theater appeared in “Magnum P.I.” in 1983. About 14 minutes into the Season 4 episode “Distant Relative,” Magnum drives the Ferrari 308 past it and the neighboring Waikiki Beachcomber hotel. The sign “Waikiki” was preserved or at least mimicked in a smaller version that sits atop the little shopping center box that replaced the theater.