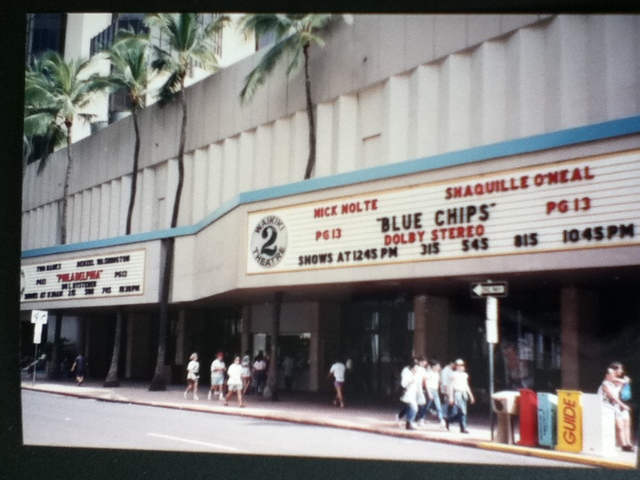 Due to the opening of the Ward Theatre, foot traffic to all three Waikiki theatres started to slow down, which lead to their closures. According to an article in the Honolulu Advertiser, the last movie shown as the Waikiki 1 & 2 was “Harry Potter & The Chamber Of Secrets” on November 20, 2002.

It was converted into a Ross clothing store.

I remember seeing “Corvette Summer” at Waikiki 2 in the summer of 1978.

Thanks CodyZamboni for the great photos & film list. I loved the way this theatre was built, although Waikiki 3 was my favorite theatre. I saw a lot of those movies you mentioned at the twins myself, although I didn’t know that “Halloween” played there…I think I saw that movie at the Nanakuli Cinema…

When I visited my wife who was stationed at Tripler, we went and saw Final Countdown here. When I was stationed at Schofield, Saturday nights was dinner at Tanaka’s of Tokyo then off to see a movie here. Good times.

I made a huge mistake one night. I asked for one ticket only which made my wife very angry. ONE PLEASE!

A nice picture of Waikiki 2 auditorium from 1999 when the HPS-4000 sound systems went through a major upgrade. From HPS website

Nice picture sartana. you will notice the open projection booth window. Before they started showing advertising slides during intermission we had a curtain that would close in front of that window so you could not see into the booth. Then at the start of the show when the lights went down and the show began the curtain would open as a part of the opening automation procedure.

Thanks for that info Vito. I do not blame the company for closing these wonderful theatres. After all they are here to make money and have to survive.

I do however blame the moronic people for abandoning these theatres in the favor of shoe box multiplexes which as you said in the Cinerama page, are nothing more than screening rooms.

And that is exactly what todays generation deserves, to see films in little boxes rather than real theatres.

The May 19, 1969, grand opening date cited in the overview as I write this comment is incorrect. The correct opening date (for Screen 1) per trade reports and Honolulu newspaper coverage was September 23rd, 1970. (Screen 2 opened a bit later.).

Also, a slight correction/clarification is needed for the world premiere of “Tora! Tora! Tora!” claim since technically it was a co-world premiere as the film premiered simultaneously* in four cities (Tokyo, New York, Los Angeles, Honolulu).

*The premieres weren’t literally simultaneous because of, obviously, time zone differences between the four premiere locales.