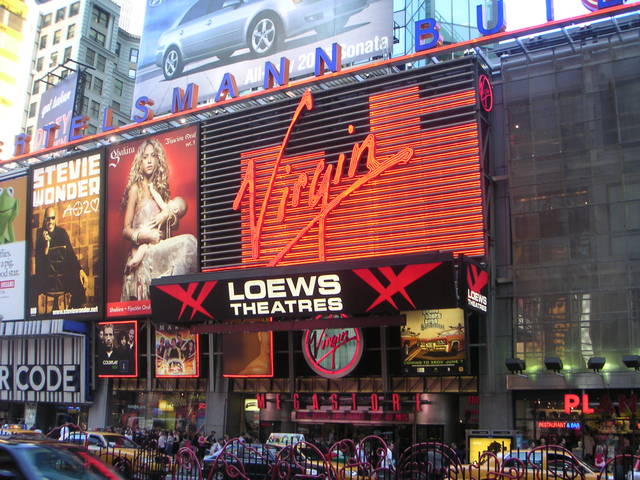 Built in the basement of the Bertelsmann Building in Times Square (and on the site of the original Loews State Theatre, which had been demolished in 1987 and has its own page on Cinema Treasures), the Sony Theatres State opened on April 26, 1996. With comfortable rocking seats and large screens in each auditorium, its arrival in the area was much welcomed.

When the Loews 42nd Street E Walk opened in November of 1999, however, the Loews State 4 found itself relegated to the role of holdover house for its glitzy cousin three blocks away, the Loews Astor Plaza and the Criterion Center.

Convincing people to spend $9.50-10 to see films that were already weeks or months into their initial release (save for screening series of films produced by the now-defunct production company The Shooting Gallery) proved to be a losing cause, as did the vague notion of competing with the nearby AMC Empire 25, which opened in April of 2000.

Virgin had the ground floor, as well as two lower floors. The box office to the theater was on the second basement floor, and the theaters were located one level below that.

I went there for cheap movies, and the occasional free preview.

Times Square has been a shopping destination ever since a man stood on a corner and counted how many people were visiting the “old” Times Square of pornography and drug use. That’s when The Gap opened, and the “new” Times Square began.

Where there are tourists, there are consumers. New Yorkers might not shop there, but Barnum’s fools are still visiting Times Square and parting with money a century after he opened his dime museum.

I was at the LOEWS STATE 4 in the basement once. The screen went dark hafway through the picture and NOBODY had a clue what to do. Did not see any usher and the girl in box office was busy chewing gum and gave us a refund and said very little. This was before IPADS for she would have been on that too.

I, too, found it interesting that there was almost never anyone in that subterranean quad despite a fair amount of traffic in the music store and the video store beneath that.

The ad at the top of this page is the original Loew’s State after it was refurbished in 1959. The Sony State Theatres had a simple marquee under the Virgin Megastore sign. I went there a few times. Always empty. Kinda sad.

Photos of the original State have been removed from this theater’s page.

Now THAT’S the Loew’s State 4! Thanks for the fix!

This was a weird theater. It was located in the basement of the Virgin Megastore, in an attempt (I suppose) to make the store an all-around entertainment experience. It was never obvious that there even was a theater, and I suspect most shoppers had no idea. I saw The Blair Witch Project and Stir of Echoes here, in nearly-empty screening rooms. If I remember correctly, near the end they were running Bollywood films.

The reason why Loews State 4 closed was because of the AMC merger. AMC at the time had the busiest theater in the country (long before bedbugs took over) with the Empire 25 across the street from Loews' much larger E Walk 13 theater. It was nearly two years after Loews Cineplex sold the Astor Plaza theater before it became the Best Buy/Playstation Theatre. Regal would soon take over the EWalk and the rest is history. I remember going into the Virgin Megastore while on a trip with the Boys and Girls Club of Clifton’s teen group and looked at all the massive CD collections. I didn’t have enough money so i just browsed the store, which was more popular than the movie theater inside the store. Sadly the store became a forever 21.