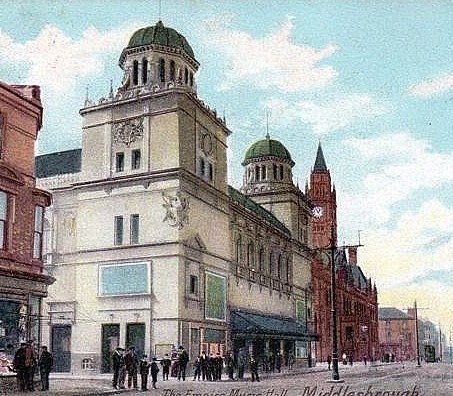 Located in the city centre of Middlesbrough, Teeside, next to the Town Hall on Corporation Road, and bounded by Pine Street and Dunning Street. The Empire Theatre of Varieties was opened on 13th March 1899 with a variety bill headed by Lilly Langtree.

The Empire Theatre of Varieties was designed by noted theatre architect M. Ernest Runtz of London. The facade in terra cotta was designed in a Spanish Renaissance style, said at the time to be the first building in the United Kingdom to have that style. The four corners of the building had a tower feature. Inside the spacious foyer there are marble columns. The Renaissance Revival style auditorium had seating provided for 600 in the orchestra stalls, 150 in the dress circle and 750 in the gallery, plus six boxes adjacent to the proscenium. There were six dressing rooms. The proscenium is 30 feet wide and the stage 35 feet deep. Many famous stars appeared, including the American escapologist Harry Houdini.

From at least April 1909, the Empire Theatre of Varieties was screening films as part of the variety programme. By May 1915 it had gone over to full time cinema use, and this lasted until 1918 after the end of World War I, when live variety returned. In May 1929 it was taken over by Thompson Enterprises Ltd. chain, headed by Thomas Thompson. It was listed as the Empire Cinema in 1937, but this seems to be a short lived change of use, as it soon reverted back to live variety theatre use.

In the 1960’s it was converted into a bingo club, which continued into the 1990’s. Since then it has operated a theatre themed bar, with occasional live performances.

The Empire Theatre is a Grade II Listed building.

Photos of the auditorium here:–

EMPIRE THEATRE – from stage as a nightclub 2008