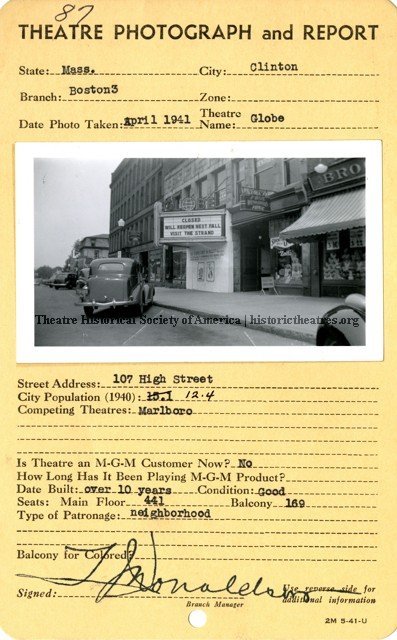 The Globe Theatre was an old movie theater downtown in Clinton many years ago. It was listed as (Closed) in 1941 & 1943 editions of Film Daily Yearbook, and was under the ownership of Warner Brothers Circuit Management Corp. It had re-opened by 1950.

The Theatre Historical Society archive in Illinois has the MGM Theatre Report for the Globe. Says it’s at 107 High St., is in Good condition, does not exhibit MGM films; and has 441 seats on the main floor and 169 balcony seats, total: 610. There is an exterior photo dated April 1941. The Globe closed during the summer months (no AC).

The 1914 and 1915 reports of the Chief of the Massachusetts District Police list three theaters operating at Clinton: the Globe and the Star, both operated by the Clinton Amusement Company, and the Town Hall. All three were listed as being in good condition.

The 1920 edition of the New England Business Directory listed the Globe, Star, and Strand Theatres at Clinton.

This article from the Clinton Times & Courier cites local historian Terrence Ingano’s claim that the Philbin Theatre was the original name of the house that later became the Strand. It was opened in 1924, he said, but that doesn’t jibe with the 1920 listing of the Strand I cited earlier, unless there were two theaters called the Strand in Clinton, and the name was moved to the Philbin at some point.

An item in the December 16, 1922, issue of The American Contractor says that P. J. Philbin was the president of the Clinton Theatre Company. A 1909 Moving Picture World item said that the Star Theatre would open in the Philbin Block in Clinton about the middle of August. Apparently Mr. Philbin was Clinton’s early theater magnate.