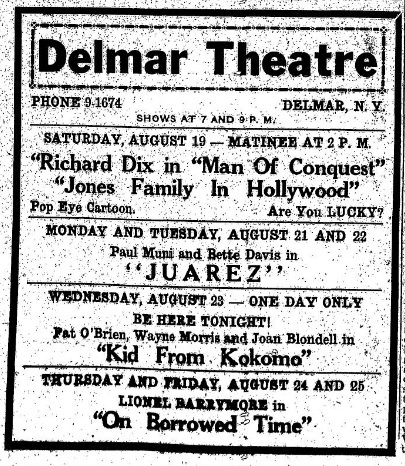 The Delmar Theatre opened in 1929, operated by Joseph Jarvis and his family as a neighborhood/village theater. After Jarvis died in 1949, his wife Mary K. Jarvis and her son, Joe Jarvis continued to manage the Delmar Theater. Throughout the years, the Delmar Theater was not only a mere movie theater, but like many small-town cinemas, the site of gatherings for events such as charity benefits.

The Delmar Theater closed April 4, 1958 after a double feature screening of “The Bravados” and “The Fly”, a victim of television and competing drive-in theatres in the area. The building still exists today, with additions built onto it, as a strip mall.