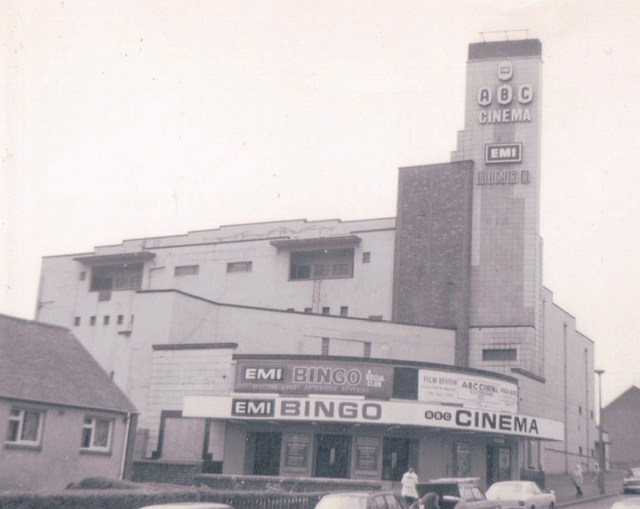 Located in Clydeside, West Dunbartonshire, on Graham Avenue near the corner of Kilbowie Road. The La Scala Cinema was opened on 14th February 1938. It was an independent cinema that was booked by A.B. King. Seating was provided in stalls and circle levels. The proscenium was 44 feet wide, and it was equipped with a Western Electric(WE) sound system. It was closed in 1941 (possibly due to wartime conditions), and didn’t re-open until 1944.

The La Scala Cinema was taken over by the Associated British Cinemas(ABC) chain on 31st August 1959, and it was re-named ABC in 1965. The ABC closed on 12th April 1964 for conversion into a bingo club located in the former stalls, and a 776-seat cinema in the former circle, which re-opened on 31st July 1969.

The ABC was finally closed on 19th February 1983, but the bingo club was kept open for many more years. After a period of not being used, the former circle (cinema) area was converted into a snooker club. This eventually closed and and in the mid-2000’s the Gala Bingo Club in the former stalls area also closed (a victim of the new ‘No Smoking in Public Places’ ban which became law in Scotland in March 2006). In June 2013 it was offered ‘For Sale’ by public auction on 11th July 2013, with an asking price of £100,000.000. After laying empty and unused for 10 years, demolition of the building began in March 2016 for housing to be built on the site.

Over the nights of 13 and 14 March 1941, the town was largely destroyed by a Nazi blitz, suffering the worst destruction and civilian loss of life in all of Scotland. 528 people died, 617 people were seriously injured. Incredibly, the La Scala cinema was almost untouched, and provided a rallying point and clearing centre for those left homeless.