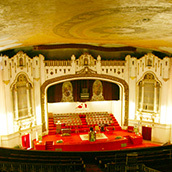 The Fairfax Theatre was opened June 16, 1926. This vast Spanish-style theatre had a colorful roof sign that could be seen from vast distances.

It changed to Spanish-language films about 1969 and then closed in 1972.

A few years later, it was taken over by a church and has served in that capacity since.

My name is Walter and as a child I lived on Fairfax Ave. back in the early 60’s. I attended the elementary school around the corner from the Fairfax Theater known as Hoarce Mann. Anyway, as a child I remember every Saturday my mother would take my sister and I to the Fairfax for the matinee. I remember the fare was 35 cents for children and a bucket of buttered popcorn was about 20 cents. In those days, we saw two movies and cartoons. I also remember the original and newly released Beatle and 007 movies, and how we children went wild in the audiance as was the common way of reacting to the Beatles and 007 even on the movie screen. They were popular back in the early 60’s and how the Fairfax was a main attraction with many people from the surrounding areas giving it lots of business. The area’s neighborhoods were also very nice middle class environments back in those days. I also remember the aroma of those revolving hot dogs and the classic candies that were sold then. I indeed cherish those days as a kid. I am glad the Fairfax still stands although in a different capacity. Many memorable movie theaters have been torn down such as the Broadway, Lux and Roxie of which I also remember. It is nice to know that part of Oakland’s history and my childhood has been preserved. I am totally impressed with the current images of the Fairfax.

Yes the Fairfax was my local theatre as a kid. I was between the Laurel and Fairfax. This was a first class big neighborhood house. It had the same laddy in the small ticket booth year after year. We’s sneak in Caspers hot dogs from next door. My friend who was a manager at one time in the 60’s at the Fairfax tells me the east bay rep for Golden State told him not to dump the old hot dogs on Friday night that had been turning all day and night in the candy counter just to put on for the kids on sat afternoon and get rid of them! That’s why I think we bought our own in. Who wants old hard dark over cooked hot dogs. speaking of hot dogs the Fairfax had this great intermission trailer that ran for years showing two hot dogs gettin ready to go on stage with a bun, this was a great visual. When the curtains closed or opened they had blue lights on the bottom of the screen. The union projection people gave you your moneys worth. The church people in the place now need to bring back films from time to time, get the people off the streets and let them see entertainment on a big screen.

The Fairfax for a very short period, showed adult movies (of course I had the cashiering job). It is a beautiful theater. The first thing you smelt was the popcorn, and next to the snack bar, was a vending machine that you could buy popsicles, and fudge bars from. Had a great womens lounge with leather couches. It went from adult movies to showing spanish movies, to compete with the Plaza on East 12th Street. Lousy patronage caused the spanish films to stop and the Fairfax was closed for good. When the adult movies moved to the Cine 7, I travelled along with the job. I passed by it and saw that one of the plywood slabs was missing and walked in. They were just converting it to a church, adding fresh white paint. The stage was in the process of being converted, I noticed that the asbestos fire curtain was halfway down(nice red tapestry looking thing) and the main curtain was gone, the box office was converted into a planter. The neighborhood was rough then, a very nice lady I spoke with said that they asked for extra patrol if they could. Haven’t been by it since, always wondered how it looked inside.

In memory of my Father,Pastor Billy C. Sheard,Sr., we would like to thank all who wrote in about the Fairfax Theatre. My Twin sister (Suzette Sheard) and myself (Darnette Sheard Collins) are now Pastorâ€\s of this beautiful theatre (Church). We will continue in our Fatherâ€\s memory, the vision to restore the Fairfax theatre back to itâ€\s original beauty, and to also use the theatre for community purposes. If anyone would like to help, or know of anyone who can just lean a hand in the theatreâ€\s restoration process: please contact: Your help would be greatly appreciated. Blessings to you.

I went to the Fairfax a lot in the sixties. The parking lot had a posterboard facing Bancroft Avenue, showing what was playing on one side, and what was coming soon on the other, using the real movie posters. In the early 60’s, I had a crush on the ticket taker,he was a cutie pie so nicely dressed and friendly with everyone as you walked in. I went to Fremont High and one night we had a dance in the gym. My boyfriend and I got into a spat, and I stormed out. When I stepped out to Foothill, the Fairfax rooftop sign was on, so I walked all the way to the Fairfax, party dress and all. “Station Six Sahara” with Carroll Baker was playing and there was a note on the box office glass that the movie was for adults only. The woman in the box office was hesitant in selling me a ticket and all of a sudden the cutie pie ticket taker came out and said “My you look lovely this evening, movie begins in less than a minute” and let me in. Its amazing that a city like Oakland, does not have any neighborhood theaters left. Sad

I know I am really late for this conversation, but can anyone tell me more about the casper’s hot dogs shops in the nearby area? I was researched Casper’s at 1240 1st avenue, near the lake, and both 5601, and 5300 block of foothill (Fairfax theater address) I already am well acquainted with the ones commonly known in Oakland. I also know the difference between Kasper’s original’s and Casper’s.

Yes there was a Caspers to the left of the Fairfax Theatre. Went by the former cinema yesterday and It was a mess out front, windows dirty nothing in the poster cases and the Is It even open as a church on Sunday any more. The back parking lot outside on the street is full of garbage and junk. I wonder if the huge iron neon Fairfax sign that was taken down off the stage house roof still sits laying up on the roof? Time to bring this former huge cinema back for entertainment for the East Oakland neighborhood with a complete remodel and paint job. Church on Sundays and other forms of movies and local music stage entertainment the rest of the week.