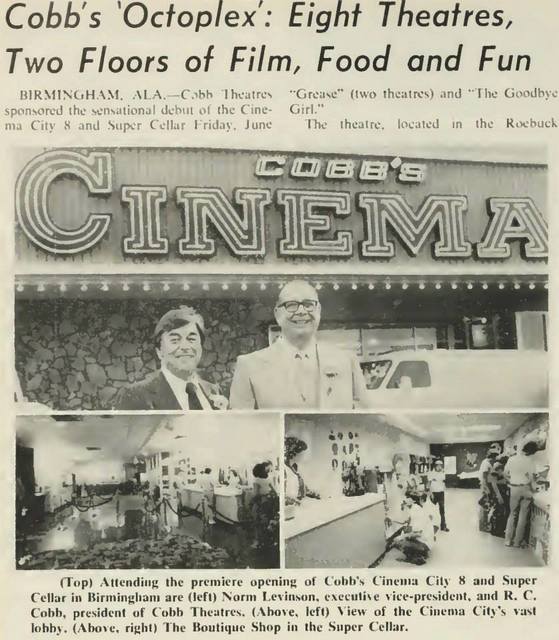 Cobb Theatres opened the Cinema City VIII on June 16, 1978. It was built in a converted W.T. Grant Store. The architect for the Cinema City VIII was Lloyd F. Vann. The theatre occupied 20,000 square feet. It was equipped with a Christie platter and was fully automated. It had wall to wall screens. The theatre motif was done in earth tones of brown, yellow and orange. Some of the opening attractions were “Corvette Summer”, “If Ever I see You Again”, “Saturday Night Fever”, “The Greek Tycoon” and “The Last Waltz”. The Cinema City VIII closed in the early-1990’s.

1978 Grand Opening newspaper clipping added courtesy of Alan Goodwin. “Grease” on two screens and “The Goodbye Girl” were among the opening films.

Since pictures do not lie, I guess this proves that Norm Levinson did smile on occasion. Personally I never saw it happen nor do I know of anyone who did but there it is. In 1990, when Norm retired, Cobb did what many thought impossible. He hired a UA Theaters exec from New York that made Norm seem like Mr. Rogers.

Grand opening ad, which claimed (Falsely) that this was the largest cinema in the USA (Somebody in Cobb’s marketing department forgot to check the Redrock 11 in Las Vegas). 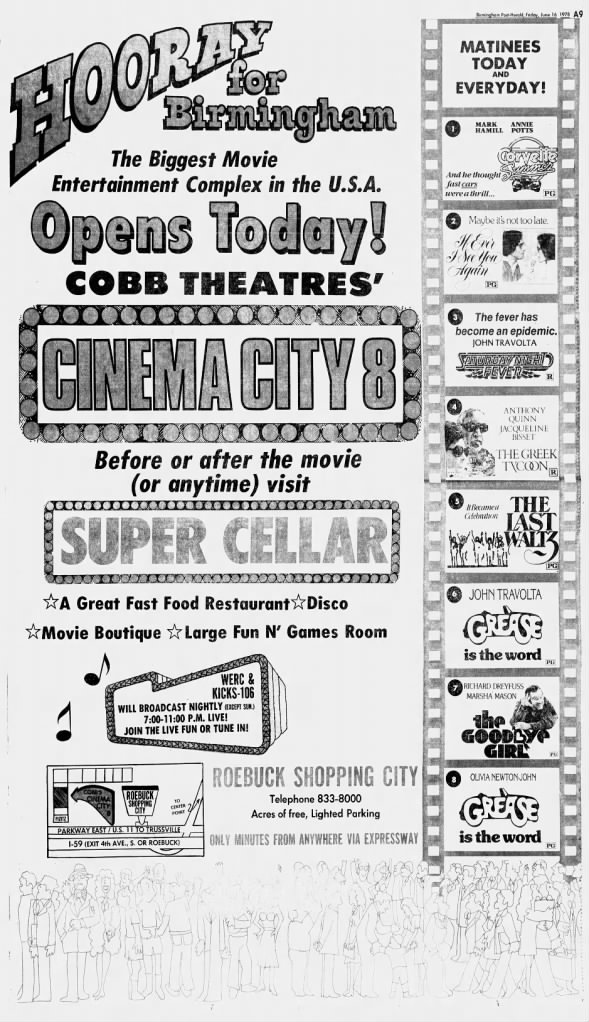 I am not familiar with the Redrock 11, but if pressed on the matter I imagine Cobb would have pointed out that this was more than just an 8 screen movie theater and that their key to the claim is in the hype: “Biggest Movie ENTERTAINMENT COMPLEX In USA.” I was never inside but I do remember the publicity surrounding the opening. Just the eight screen count was newsworthy as there was nothing else larger than the Homewood 4, later enlarged to 6, in Birmingham at the time. Even in Atlanta there was nothing larger than a couple of AMC 6’s although that would soon change.

The bigger difference was what was downstairs underneath the lobby and maybe even the slope of the auditorium floors. This opened at the height of the disco craze and one of the opening features was indeed Saturday Night Fever, six months removed from its Christmas opening. This lower area contained what amounted to a non alcoholic disco nightclub, a grill / snack bar that sold items like hot dogs and pizza long before those items became standard at theater concession stands, and a full sized (for the time) game room. This was before the era of gourmet coffee and the Cafe Noir type Starbucks style ripoffs of more recent years, but it did contain a boutique movie souvenir shop. This and the grill can be seen in the picture that is currently at the top of this page. It was quite an operation and about 15 years ahead of its time.

Within sight of this shiny new Cinema City was the ten year old Roebuck Plaza Theater, built and later twinned by ABC. It was at about this time that ABC sold out all of its interests to Plitt and within a couple of years Plitt had sold the downtown Ritz to Bowie and the rest of their Birmingham locations to Cobb. Unfortunately this Roebuck area, along with most of the northern arc from Irondale to Bessemer was in decline as the mines and steel mills were in their final days. Most of the growth was to the south in Vestavia Hills and especially Hoover. Six months earlier ABC had opened the Hoover Twin, bringing first run movies to the south side. Before long, the Galleria Mall would open taking all of the development, multi and megaplexes with it.

As for Cinema City, I don’t know how long the downstairs Entertainment Complex was a going concern, but after a couple of years I don’t recall much mention of it. The theater itself however mirrored the fortunes of its neighborhood. In 1983, only five years removed from its premiere as next greatest thing in movie entertainment, it was downgraded to dollar house status. It soldiered on until the age of the megaplex made it obsolete just as it had foretold the end of the era of twins and quads.

BTW Fun Fact: Ray Syufy was SO greedy, he kept expanding the Cinedome Orange to 11 screens! Red Rock was owned by him also…Also the Original Century 21 dome was across the street from the notorious Winchester Mystery House (stil there). As the ghost of Sarah Winchester said “KEEP BUILDING!” and so he did!🤣🤣🤣😍