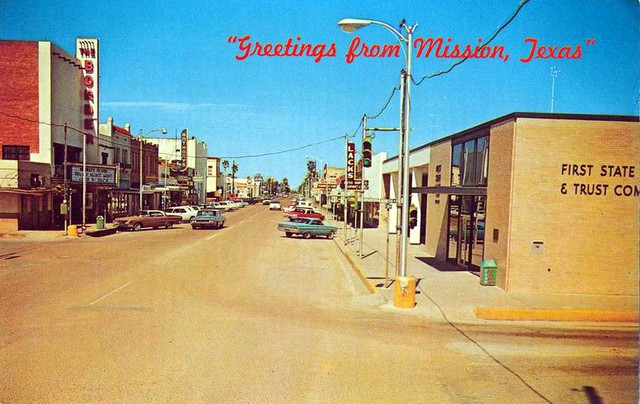 The Border Theatre has provided three generations of residents and visitors with the finest movies in a typical border setting for more than sixty years.

Below the ticket booth, colorful mosaics portray expressive scenes of a simpler time. One such tile shows a man wearing the traditional sombrero and singing to a woman seated on a low stone fence.

Inside the theater, two massive wooden columns the floor to the high ceiling, and two staircases lead visitors to the balcony. The theater lobby also houses the snack bar where movie goers can treat themselves to hot dogs, freshly popped popcorn, candy, and other refresments.

Two murals cover the inside walls of the theater. Painted by Dallas artist E. Risser in 1942, these murals have captured scenes in the Rio Grande Valley and the city of Mission before modernization touched the area. Illustrated are scenes of early residents and their homes. A man hitches his burro to a post. A Mexican couple draws water from an old well. And the murals depict the covered wagon advancing on the crude little Mission near the border, beginning a new phase in the development of the Rio Grande Valley.

The Border Theatre was the fifth movie house to be built by Robert N. and Dell Smith. The Smiths were Valley theater pioneers–the theater also has the distinction of being the first Valley theater with air-conditioning throughout the building.

Designed by William J. Moore, a Dallas theater architect, the Border opened on April 3, 1942 with the Roy Rogers movie, “Heart of the Rio Grande”.

An old BORDER movie flyer and a document referencing the BORDER which was owned by R.N. Smith and managed by Kelly Ross in the 1950s.

From the 1960’s a photo postcard of the Border Theatre in Mission.

The story on the street down here in the Mission-McAllen area was that the Cinemark Tinseltown multiplex, just down the street from the Border, successfully pressured the movie companies to stop renting first-run releases to the Border because patrons were being pulled away from the Cinemark; sounds plausible, because at almost 400 seats, the Border accounted for Cinemark’s biggest auditorium. Patrons HAD to have preferred the Border experience for first-run flicks, esp. at the generally lower admission prices compared to Cinemark.

Hey Don are you a Mission, Tx resident?