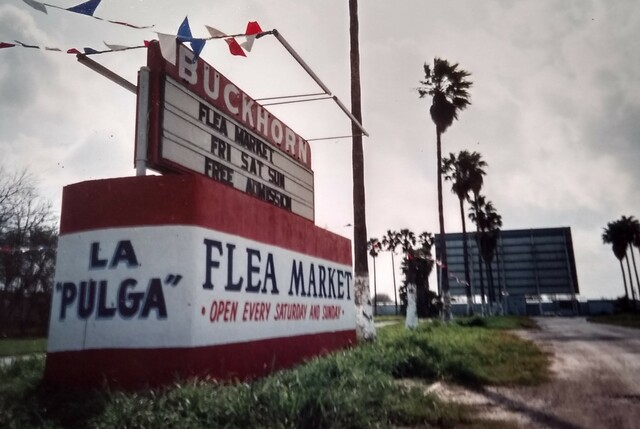 Contributed by Trail drive in
Get Movie Tickets & Showtimes

This puts it right where the old entrance road used to be. The drive-in was still intact in 1995, although it does appear to be closed. By 2002, it had been replaced mostly by a residential neighborhood. While several businesses occupy the area around the entrance.

There is no trace of the drive-in remaining.

Opened with a special invitation only screening of “Adventures of Don Juan” on June 7, 1949.

Uploaded a Library of Congress photo of the pylon by John Margolis. As the area developed there was a problem with ambient lighting.

Why the name Buckhorn?

Good question. A buckhorn is the horn from deer used to make knife handles. There have been two towns in Texas with that name. There is a Buckhorn Museum in San Antonio. There are a number of other towns in various parts of the USA name Buckhorn. The definitive answer is ask the person who built it why it was so named.

Bill Ramaland, a former theatre operator of a Corpus Christi area town of Alice (who formerly operated one out of 5 theaters (2 theaters and 3 drive-ins)) was the operator of the theater by manager Jack Humphries, manger of the Mission Chamber of Commerce who broke the ground on April 17, 1949.

The theater made its formal opening on June 7, 1949 with a barbecue cookout announced by R. J. Ramsland and H. C. Gunder. It would later open its gates to the public the next day on June 8, 1949 with Errol Flynn in “Adventures Of Don Juan”.