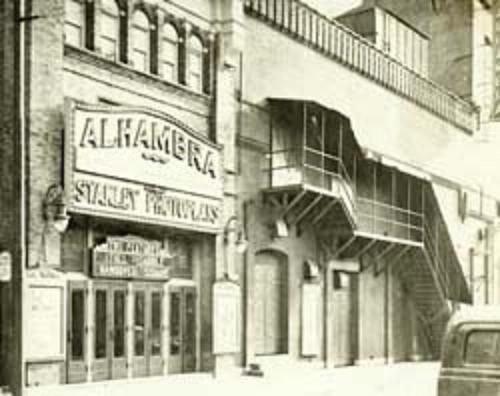 It became an event center and skating rink, which had closed by 1960. The building was damaged by fire on May 11, 1962. It was soon demolished to become a parking lot.

In what style was the Alhambra Theatre designed and does amyone have photos of this theater? Please share.

This article from the South Philly Review says that the Alhambra Theatre was converted into a roller skating rink in 1952. The building was sold to the city in 1963 and demolished to make way for a parking lot. During its last few years the Alhambra served as a boxing arena, and a more recent arena called the New Alhambra was named for it.

There are a couple of exterior photos of the Alhambra in the Irving R. Glazer Theater Collection at the Philadelphia Athenaeum. Thumbnails of them can be seen on this page at Philadelphia Architects and Buildings, but only subscribers to the site will be able to open the full-sized versions.

Thanks Joe for responding!

Frank Migone launched the Alhambra with a 2,500 seats capacity on September 11, 1911. But he sold it quickly to William W. Miller of the Wm. Penn Theatre within two months. The Alhambra exited with “I"ll See You In My Dreams” and “Pals of the Golden West” on March 9, 1952.

It was subleased on a ten-year basis as an event center featuring wrestling and boxing as well as a skating rink. The building became vacant in 1960 and was damaged by a fire on May 11, 1962 leading it to be razed soon thereafter for a parking lot.