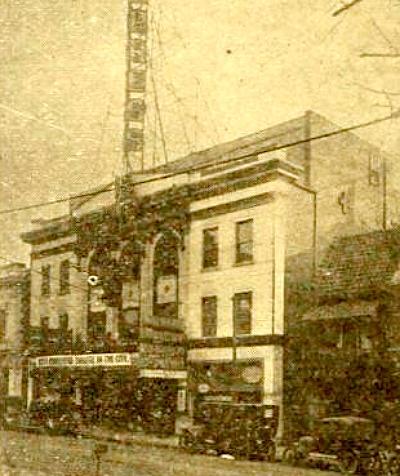 The Empress Theatre was built in 1913 as a vaudeville house and then became a legitimate theatre. Located on the south side of Olive Street west of N. Grand Boulevard, it eventually became a movie house when vaudeville declined and then reverted to live theatre.

The Classic style front with its arched windows and floor-to-ceiling glass facade for the first story gave a majestic impression.

After vaudeville declined, the Empress' management started a resident stock company in 1952. The company eventually proved unsuccessful, although in some seasons the playhouse made money. The end of its second stock season in April 1953 showed an unusually high profit. Although the playhouse had lost $35,000 the year before because of improvements and remodeling, it was able to pay this back and then some.

A typical season for the Empress Theatre would be one with 27 plays, Owned by the Ansell Brothers, the legitimate theater managed the profitable second season by cutting corners and upping the admission from $2 to $2.50. The brothers also reduced the average fee for a visiting star from $6,500 to $1,800 - which ultimately may have caused their downfall.

At the end of the 1953 season, the play that brought in the most box office receipts was “Claudia”, earning $18,500, followed by “Tobacco Road”. “Theatre”, starring Kay Francis, brought in the least amount of money - $6,500. That season television stars such as June Lockhart and Jackie Kelk played there.

The Ansells had big plans for their next season and wanted to introduce musicals to their repertoire.

However, after four seasons, Joseph and Louis Ansell had to close the doors of the Empress Theatre for the last time on live theatre. The Empress Theatre had lost $200,000 during the last two seasons. The Ansells claimed it was hard for St. Louis to support legitimate theatre – but not so. The Muny and the American were thriving at this time. Critics attributated the theatre’s failure to the inability to attract big name stars.

The theatre installed a large screen and went to motion pictures and thrived until the mid-1960’s running first and second-run movies.

The Empress Theatre is one theatre many St. Louisans remember, although it was closed in 1956. It became a Theatre & Television School and was demolished in the fall of 1970.

Under Skouras Bros. management, theatre was renamed MIDTOWN in Nov.1928 and first film shown was Jolson’s “The Singing Fool.” With high competition in the area, however, the film policy ended in March 1929. Theatre then was known as the MIDTOWN-EMPRESS and the major use was by the Woodward stock company. Theatre reverted to the EMPRESS moniker in 1933 when the Ansell Brothers took over management for a 2nd-run film policy.

Do any interior photos of this theatre exist? Where do you suggest looking?

I just added a circa 1962 exterior photo of the Empress as The Nation Of God Temple. Photo courtesy of the Vintage St. Louis Facebook page.

Vindication is so nice! In 2005 I mentioned the theatre was renamed the Midtown for a stretch…and, boy, did I get trashed by the “expert” St. Louis historian.

There was a musical presented at the Empress in 1956 called “This Is It”. The lyricist was Don Dunn and it starred Pat Paul (Vaughn), Bob Burnett, and Dave Lukefahr. Does anybody remember it? The same show had been presented in Tower Grove Park.

“This Is It” turned out to be the final public theatrical use of the theatre. The production ran from 2/7 to 2/12, 1956. After this, the house was subleased to a Theatre and Television school, which soon folded. After this the theatre was used as a revival church for a number of years. Theatre was demolished in fall of 1970.