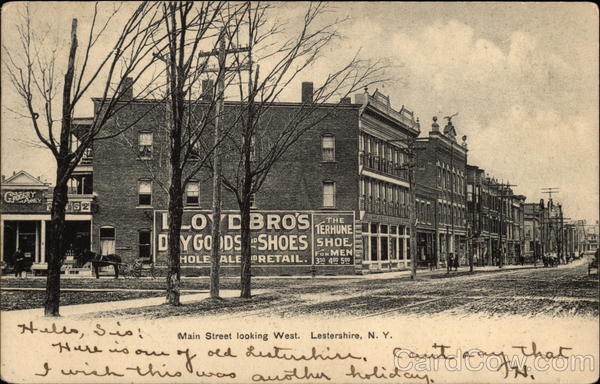 Open no later than 1900, and already described as “old” by 1904 (Johnson City, then called Lestershire, was incorporated in 1892), the Delphi Opera House was apparently Johnson City’s first theater and the first place motion pictures were shown.

The opera house had a troubled and confusing history. Andrew J. Barton was manager from 1901 until November 27, 1904, when he met his death falling down a staircase. Immediately following this event, the theater was offered up for sale, with the Odd Fellows nearly converting it to a hall but deciding the two-story building [sic] was “too low” to add a third story for meetings. It underwent remodeling for theatricals in 1905 and in 1906 it was leased out for use as a dance hall, and thereafter was used for plays and sporting events. It began to be used as primarily a movie theater around 1910.

Starting at the end of 1912, there were rumblings about the Delphi being supplanted by a new, modern movie theater “across the way” – almost certainly the Endwell Theatre. The new theater was anticipated to be opened January 1, but was not completed, which put the kibosh on various plans to loan out the theater for a poultry exhibition and basketball games.

Now called Delphi Theater, the venue limped along as primarily a movie house from 1912 to 1915, when another round of difficulties ensued. The Johnson City Board of Trustees ordered the theater closed, apparently because the building had become dilapidated, and got a second order to close after a fire inspection. The owner then undertook a third round of renovations in the summer with an eye to converting the theater to a sports venue. As “Delphi Hall”, it served in this capacity for about a year, but the theater proved too small for the crowds brought in by local basketball. The last mentions of the Delphi, in 1916 and 1917, are small items about various parties suing each other to recover rent payments.

Bygone Binghamton has the address of the Delphi at 94 Main Street, but this is almost certainly the old Lestershire numbering and not the current address, which would put it under the bridge near the arch. Comparing old addresses and remaining buildings make it clear that if it was at 94 Main Street, the old opera house must have been across from the Record building. Old postcards show a small two story building did indeed occupy the site, at approximately what is now 238 or 240 Main Street. However, a 1907 article in the Binghamton Press refers to a “large galvanized eagle” which village elders demanded be taken down from the opera house building. The eagle is clearly visible on an early postcard of the street, and pinpoints the location of the old opera house – three stories high, not two – at what is now 240-242 Main Street.

A 1951 article about moving to their new location indicates that McCrory’s Department Store had up until that time operated at 240 Main Street “for more than thirty years”. Hamlin’s apparently operated there until a fire destroyed the block in July 1966. Comparing a 1966 photo of the burning building to old postcards shows it was not the same structure as the old opera house. The Delphi Opera House was thus probably torn down around 1919.