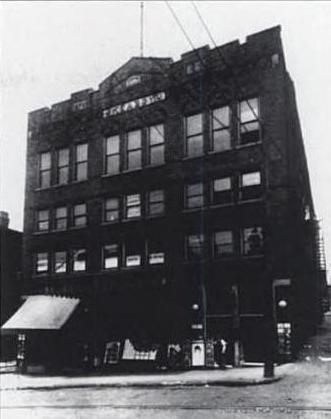 Opened as the Lomison Opera House around 1879, it was renamed Keaggy Theatre in 1895. It was remodeled to the plans of local architect Edward J. Nelson in 1916 and reopened as the Strand Theatre. By 1941, it was operated by Warner Bros. Circuit Management Corp. The Strand Theatre was still open in 1950.

In 1916, Michael and Louis Manos leased the Keaggy Theatre from Dr. J.B. Keaggy. An addition 56x60 feet was built as part of a general remodeling of the house, as noted in the January 22, 1916, issue of The American Contractor. Local architect Edward J. Nelson drew the plans for the project. The Manos brothers reopened the house as the Strand Theatre, presenting both movies and vaudeville.

The Manos brothers had entered the exhibition business in 1912, when they took over operation of a Greensburg house called the Lyric Theatre, which they still controlled at least as late as 1918. They also operated a confectionery and ice cream parlor in the Strand Building.

This web page has a photo of this theater. It is undated and no theater name is visible.

This article about the Palace Theatre says that the Lomison Opera House was built circa 1879 and became the Keaggy Theatre in 1895. It also says that Michael Manos took over the house in 1917, but the January 22, 1916, article cited in my previous comment indicates that the Manos brothers had taken a lease on the Keaggy by then. The March 4, 1916, issue of Motography also noted the Manos project, saying that architect Nelson would be taking bids for it about April 1. It’s possible that the name was not changed to Strand Theatre until 1917, though.