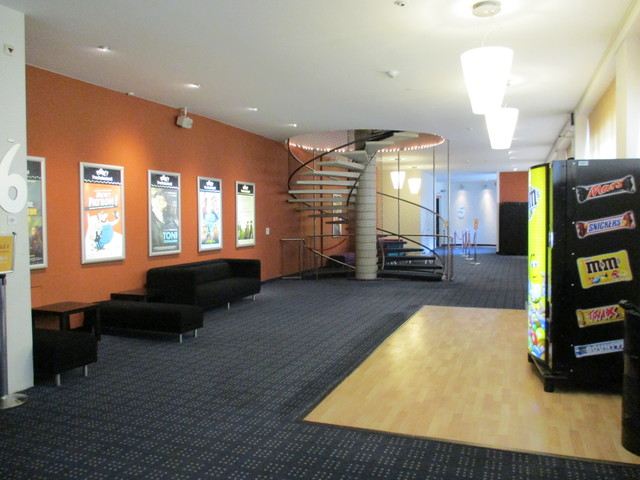 This multiplex started life in 1970 as the single screen Cinema George V opening with Goldie Hawn in “Cactus Flower”. Located at the bottom of a long downhill (or uphill) cobbly street opposite the train station this was one of the top first run houses.

In my time in the early-1980’s saw “Kramer vs Kramer”, “The Competition”, “Lili Marleen”, “Being There”, “And Justice for All” and probably a few others. You could usually count on the second show (around 17:30) being in English with sub-titles. A great date night house.

Multiplexed in the early-2000’s into Pathe Les Galeries now with 8 screens and a total seating capacity for 1,074 seats, including 279 in the largest auditorium. It plays a good mix of first run blockbuster and art house mostly in ‘Original Version’ often day-dating with the Pathe Flon which would show the hits in French.

This seems to do a pretty good job of balancing commercial needs with arthouse considering it has had to absorb the loss of the Cinema du Bourg, Cinema Lido and 2 Palace screens

Enjoyed my visit in June seeing the French film “Haute Cuisine” - recommend the Bavaria (up the hill)or the Cafe Romand afterwards!

In June 2016 I saw “The Neon Demon”, starring Elle Fanning and Christina Hendricks, in Screen 5. In a nice touch, as can be seen from my photographs, some of the projection rooms have glazed rear walls, so the projectors and projection equipment can be seen by patrons.