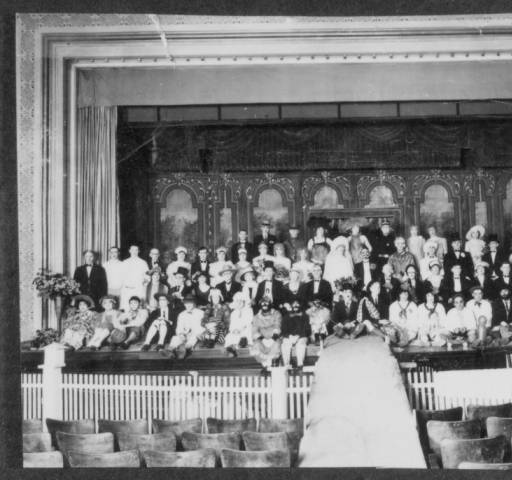 This photo can be found in the University of Nebraska’s online archival collection.

The Besse Auditorium opened as an 840-seat venue at opening on May 3, 1920, and the special guest of honor was opera singer Frieda Hempel. In 1912 she had made her debut at the Metropolitan Opera in New York City. 160 extra chairs were brought in for the performance and a crowd of 1,000. The $100,000 theatre impressed patrons. Motion pictures also were worked into the mix of live events.

Bert Beams took over the venue renaming it the Beams Auditorium in 1926 and the venue was more heavily used as a motion picture theatre. The big news at the 10th anniversary of the venue was installation of an air conditioning system as well as a refresh, reduction of seating to 500, and a name change to the Sunbeam Theatre under the operation of Harry Gould but still owned by Beams. The name was changed to the Auditorium Theatre in 1935. In 1945, Beams lowered the very high ceiling of the auditorium.

In June of 1947, Carl P. Knutson purchased the Auditorium renaming it the State Theatre with a new lobby and a new front. He also re-equipped the projection booth moving out the Simplex Acme projectors replacing it with Motiograph AA projection. A year later Marvin P Jones took on the State Theatre. It appears to have gone out of business at the end of its second, 20-year leasing period as the State Theatre on March 29, 1960 with Michael Callan in “The Flying Fontaines.”