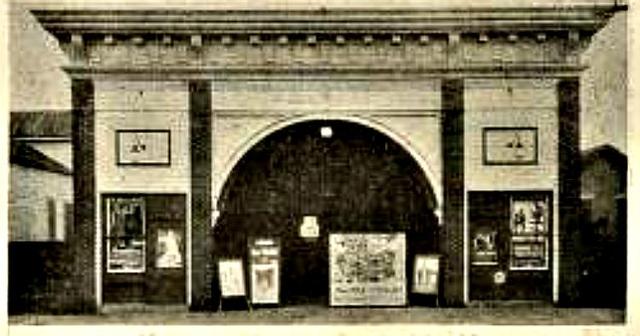 I think we have the two middle digits of the Norman Theatre’s address transposed. The January 10, 1914, issue of The Moving Picture World mentions the Norman Theatre and its manager, Edward Wentzell. The July 15, 1911, issue of the same publication had this item:

“Louisville, Ky. — J. M. Wentzell filed plans for a moving picture theater in the office of the building inspector. The theater is to be located at 2051 Portland Avenue and will cost $6,500. It is to be completed by August 1.”

Edward Wentzell was probably a relative of J. M. Wentzell. The web site Historic Aerials has views of both 2501 and 2051 Portland Avenue from 1949, when the theater was still listed in the FDY, and while there was a building of the right size for the theater at 2051, the building at 2501 was much too small.

A later report in MPW upped the estimated cost of the new theater to $7,500, and an October 7, 1916, item mentioned that a $1,200 generating plant was being installed in the Norman Theatre by manager Mort Wentzel [sic]. The October 14, 1927, issue of Motion Picture News mentioned W. M. Wentzell of the Norman Theatre, Louisville.

CinemaTour probably got the address from the FDY, and I’m sure that this is one of those cases where the FDY made a mistake and never corrected it in later editions.

In Google Street View, the building at 2501-2503 Portland looks like an old frame house that had a storefront added to its corner at some point, and then later the building was partly covered with a facing of red brick. It looks way too old to have been built as late as the 1950s, and it certainly couldn’t have held a theater. The theater in the photo wasn’t on a corner, either, which is where 2501 is. The theater has houses close to both sides of it.

The clincher is this post by Charlie Porter on Rootsweb. He remembers going to the Norman Theatre in the 1940s and 1950s, and says that it was on Portland Avenue near 22nd Street. It was still being run by members of the Wentzell family at that time.

In this 1949 view from Historic Aerials, the Norman Theatre must have been in the large, oblong building on the north side of Portland a few doors down from 22nd Street. Everything on that side of the block has since been wiped out for a freeway and its ramps.

A word of moderation here. Addresses in real life are subject to change. My own house number, for example, went from 383 to 296 by a sweep of the pen in Town Hall. I always wondered how the Willard in Queens got it’s name. Street has been subsequently renamed. The older the address the more likely to be problems.

Joe Vogel I went to this Theater when I was growing up. I also worked at the Ideal Theater till it closed in 1960