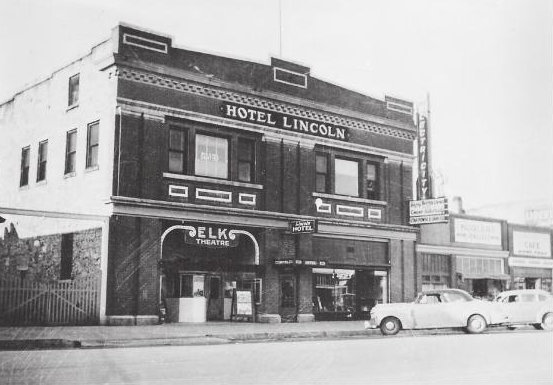 The Elk Theatre was located in the St. John’s/Lincoln Hotel Building and opened on December 20, 1916. It was mapped by the Sanborn Insurance Co. in 1921.

It was later a DeMordaunt and Drennon theater and was mentioned through 1954 in Idaho Falls Post Register. The Film Daily Yearbook of 1945 listed it with 700 seats.

The building is long gone but it was located approximately between where Wells Fargo Bank and Main Street Diamonds is today.

The September 22, 1920, issue of The Film Daily noted that the Elk Theatre in Rexburg was operated by the Swanson Theatre Circuit.

Rexburg, by Lowell J. and Mardi J. Parkinson, says that the Hotel Lincoln and Elk Theatre were built in 1915. There’s a photo from around 1950 on page 61 (Google Books preview) and an older photo on page 41. The caption of the older photo says the building was demolished in 1963.

The Rexburg Historical Society provides this undated photo showing what appears to be the cast of an amateur theatrical posed on the stage of the Elk Theatre.