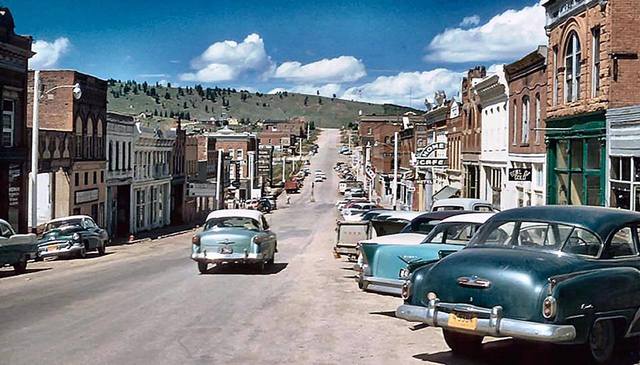 The Star Theatre is listed in The Billboard of March 21, 1908 as a 1,000 seat movie theatre. The manager was Frank Weltz.

It is listed in a 1911 business directory when the proprietors at that time were Taylor & Ford. The Star Theatre is also listed in the 1929 Film Daily Yearbook with 425 seats. The building was demolished around 1990.

It’s possible that the Star Theatre later operated under the name Vida Theatre. The Vida Theatre, operated by Charles Diller, was mentioned in the March 3, 1937, issue of The Film Daily.

This photoof Bennett Street in the 1930s shows the Vida Theatre on the left, in the same block where the Star had been located. Because the photo was taken with a telephoto lens it’s difficult to tell exactly which building the Vida Theatre was in, though.

This photo, dated 1939, has slightly better perspective, and the Vida Theatre is more easily seen as it has acquired a modern marquee, but I’m still not sure it was at the Star’s address. Cripple Creek had at least two other movie theaters, both mentioned in issues of The Billboard in 1908: The Ideal Theatre, which was in operation by spring that year, and the Nickelodeon, opened by Taylor & Ford on August 1. I haven’t found addresses for either of them, so they might or might not have been close to the Star.

A 1915 item in The Moving Picture World mentioned two movie theaters being in operation at Cripple Creek, but no names were given. One must have been the Star, though.

With a bit more digging I’ve found two more photos, and I’m now pretty sure that the Vida Theatre was at the same address as the Star. However, I also believe that the building the theater was in might have been demolished, along with its neighbor, and replaced by the building that has “1991” carved on the small turret atop it. But it’s also possible that the two buildings were just given a new, unified front that year.

This photo probably dates from 1940 (the movies on the marquee came out in 1940 and 1939) and shows the Vida’s marquee attached to the fifth building up from the corner of 2nd Street. In Google’s street view, the sixth building from the corner has the address 220, so the theater must have been at 218.

Also interesting is this photo dated December 17, 1969. The building sports a skeletal marquee that says “Silent Movie” on it. A Rootsweb post I found says that “[i]n the late 1950s to early 1960s, Austin O'Toole operated a silent movie theater and hand-cranked arcade games out of this location.” The post refers to a building across the street, but the photo suggests that Mr. O'Toole might have moved his cinematic venture to the former Star/Vida Theatre later in the 1960s. I haven’t been able to find anything else about it on the Internet, though.

Circa 1957 photo added courtesy of the AmeriCar The Beautiful Facebook page. Appears to be an empty marquee on the left. Same POV as some of Joe Vogel’s photo links. And the buildings match those in the Google Street View.

Demolished circa 1990. Just examined the Google Street view again, and the Star Theatre with it’s neighboring building were torn down, and replaced with one long building that has “1991” in the stonework at the top. New construction designed to look old. They replicated the arched window style of the street on the new building. The building to the left of the Star Theatre is still standing, as is the one two doors to it’s right.