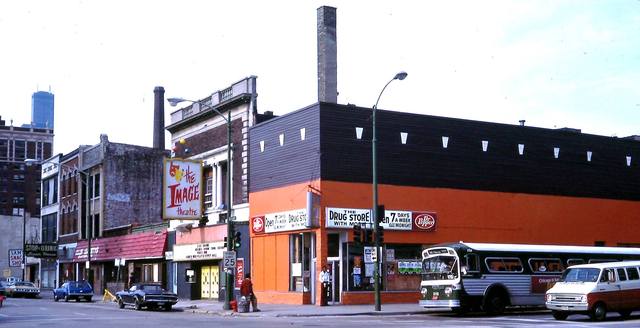 Opened as Immenhausen’s Theatre in 1913, it was designed by the firm of Walker and Lowell and designed in the Georgian Revival style. Later in 1913, it was renamed the Standard Theatre. The theater was located on Clark Street at Chicago Avenue, in Chicago’s Near North Side neighborhood.

Actually, the Standard was open for decades after the 1930’s, although it did not advertise in the papers. In the late 50’s and early 60’s, it showed a different double feature daily…third, even fourth run films. Back then, north Clark st. between the Chicago river and Chicago ave. was like a mini skid row, second only to west Madison st. The Standard got its business from the alcoholics, the poor residents of the nearby Lawson YMCA , and the near homeless people of the area at that time. Was kinda scary going inside as a kid…not sure what would happen. It had one of the smallest lobbies I’ve ever seen, but enough room on the walls to advertise all the upcoming movies for the week.Lots of westerns, horror , crime and comedies.By the mid 60’s it closed, but reopened in the late 60’s …all cleaned up… as LE IMAGE Theatre, showing art/ foreign films. “STOLEN KISSES” by Truffaut was the opening attraction. Later saw Pasolini’s “TEOREMA”. This new policy lasted a few years…not too successfully. By the early 70’s was showing gay porno. The theatre closed for good by the mid 70’s.

Wow interesting info KenC. ANyone have any recent or old photos?

I think the Image closed as a theatre in the late 70's. It was in the process of being converted into a night club in the late70’s, when a Stop Work Order was issued by the city. An expensive sound system had already been installed, but never got utilized.
Unless the Image reopened again as a theatre after that in the early `80’s, I believe it was done as any kind of venue after the failed opening of the night club.

I was there in 1969 when it was Le Image and showed art movies. I recall that it didn’t last too long.