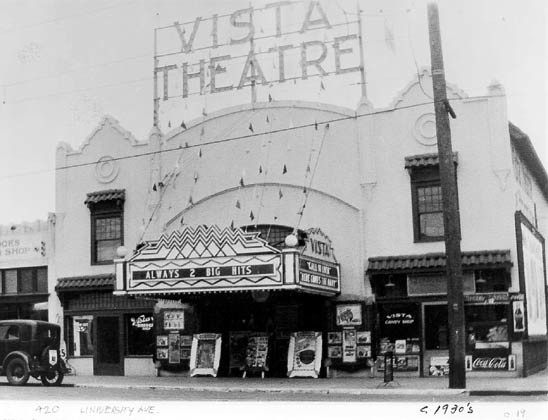 Either this address is wrong or the street numbers have changed since it was in business. This location is now 4201 University Ave. and the building is being used as a market now.

Same building so it must have had an address change.

The trade press reports say this theatre opened as the Liberty Theatre in March of 1918. The Bush Circuit purchases the theatre and remodels the auditorium reducing seat count to 600 opening in November of 1920 as a second-run double-feature venue. The theatre transitions to sound and is supposedly renamed the Forum Theatre briefly. The theatre gets Western Electric sound in 1932 and is back under the Vista Theatre nameplate. Looks have discontinuity in operation and is transferred to Kaplan & Klein in 1935 which, for competitive reasons, likely closed and/or retrofitted the theatre building as it was opening the new Adams about two miles away.

Interestingly, the city directories of the time never listed the theatre as the “Liberty.” The first mention of the Vista Theatre is in the 1921 San Diego City Directory. At this time the theatre was located in the City of East San Diego, a separate municipality from San Diego. The two cities merged in December 1923 to become San Diego. In 1926, San Diego renumbered the street blocks in this community, so the original (East San Diego) address of 4053 University avenue changed to the current 4201 University avenue. By January 1937, the building was listed as “For Sale” in the San Diego Union newspaper. It eventually became a candy shop, then a furniture store, and is now a budget store. The exterior has been slightly modified over the years, but is still recognizable today.