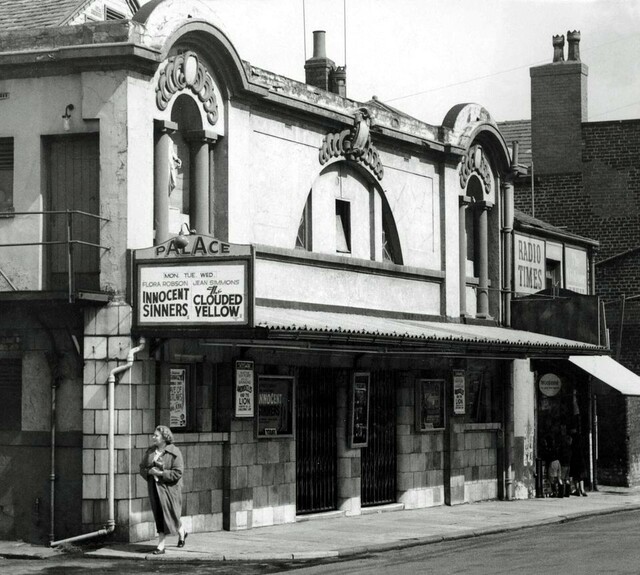 Located in Farnworth, to the south of Bolton, Lancashire. The Palace Theatre was opened on 11th December 1911 with 764-seats. It was operated as a cinema with variety acts on the stage. It had a 25 feet wide proscenium. It was equipped with a British Thomson Houston(BTH) sound system in 1930, and was re-named Palace Cinema, coming under the H.D. Moorhouse circuit.

The Palace Cinema was closed on 8th November 1958 with Richard Widmark in “The Last Wagon”. It was demolished to build and extension to Mellings Bakery.

This item is copied from ‘Farnworth Paintings’:

The Palace Cinema, King Street was opened on 11 December 1911 and was Farnworth’s first purpose built cinema. It had 764 seats and the Farnworth Journal described it as having ‘a generous allowance of room for those who occupy the 2d and 4d places, every corner having its own tip up seat, whilst the 6d seats covered in pegamoid, and the 9d ones in red velvet are luxurious’. The cinema closed on 8 November 1958 leaving three cinemas in Farnworth, the Hippodrome, the Savoy and the Ritz. The last film was Richard Widmark in The Last Wagon (‘Nothing could stop the last wagon coming through’). The cinema made way for extensions to Mellings Bakery.