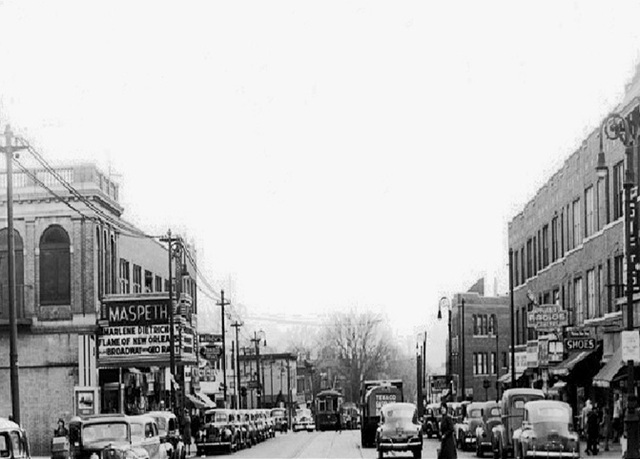 This was a neighborhood house located on Grand Avenue in the Maspeth section of Queens. It opened in 1924. I dont know when it closed but the marquee was still up way into the 1970’s.

Today it is used as a bingo hall with its Grand Avenue entrance area used for retail use.

Here is a photo I picked up on Ebay

Thanks for the terrific picture. It not only evokes the time, which I guess was late 40’s/early 50’s, but provides a picture of Grand Avenue in Maspeth before it was rudely cut in two by the LIE.

I did a little research and found that the photo was almost certainly shot in the spring or summer of 1949. While both films on the double bill were released in 1948, “He Walked by Night” opened on November 24th of that year. Since the Maspeth was decidedly not a first run theater – and since I clearly doubt that summer arrived in December, 1948 – the films most probably came to Maspeth about six months after being released.

A bit more trivia about these films: (1) the Bob Cummings film – “Let’s Live a Little” – also starred Hedy Lamarr, who played a shrink, and (2) it has been alleged that one of the the other film’s supporting players, Jack Webb, used “He Walked by Night’s” story line as a prototype for a project he was developing – called Dragnet. Well, those are the facts maam!

Well, I guess it has now been displayed three times!

Yes, I tried to fix it too, but it doesn’t let you get off the Long Island Expressway and onto Grand Ave where the street view belongs. This one will have to require an administrative “fix”, as the link to the street view is WAY off

After being a reader of ct for years I decided to officially sign up after 30 minutes of searching the google map, getting off the expressway, and finding the Maspeth. Left NY 33 years ago but I still remember taking my mom to the Maspeth 3 times a week for bingo.

Hahaha! Thanks for getting of the Expressway and fixing it! I have up after some minutes on the expressway where the view originally left us!

My pleasure Bway. By the way ct I like the new web design. Good job.

Just FYI, a large painted reproduction of the “He Walked By Night” photo is on the wall of the new TD Bank that opened on 74th & Grand Avenue. Maybe I’ll take a photo of it the next time I’m there.