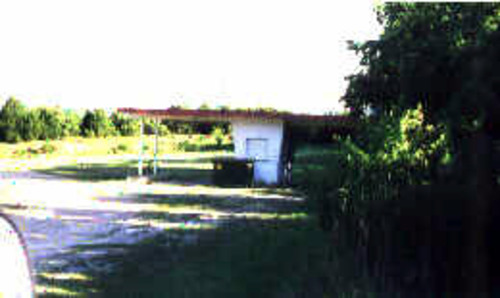 The Rolla DeLuxe Drive-In opened on October 17, 1950. The car capacity was listed at 500. It was operated by Commonwealth Theatres from April 4, 1971. The drive-in closed around 1987 and has since been demolished.

everything was still in tact in 1992 but the screen was gone in 1995 but everything else still stands and some ramps may still remain,

It might have continued to operate through 1987, since there’s a nice aerial photo from that year at VintageAerial.com.

Another note in the same issue:

The Aug. 27 issue added a couple more names, “The drive-in theater being erected by Cecil and Roscoe Hopkins on Route 66 two miles east of Rolla, Mo., is expected to be ready for opening within the next two weeks.”

Rowe E. Carney, Rolla theatre operator, has purchased the drive-in theatre under construction on Highway 66 east of Northwye from Mr. and Mrs. Cecil Hopkins and Mr. and Mrs. Roscoe Hopkins.

Included in the purchase was a three-acre tract of ground between Highway 66 and the Frisco Railroad.

Cecil Hopkins had reported that the theatre would open tomorrow, but construction is not yet completed. …

Mr. Carney, who owns a chain of theatre in this area, had planned to build a drive-in theatre just north of the Pennant Hotel.

A YouTube video, shot in May 1959 by Rowe Carney Jr. and Tom Smith, shows a car’s-eye perspective of the Rolla Drive-In from the divided highway behind it. The back of the screen tower comes into view on the left side at about 2:58.

The Sept. 3, 1949 issue of BoxOffice explained why the almost-complete drive-in didn’t open that year:

“ROLLA, MO. – Rowe Carney, head of R. E. Carney Theatres, Harry Blunt and associates have purchased ground between new Highway 66 and old 66 as the site for a 500-car drive-in. They hope to have it ready for operation early next spring.

“Previously, Carney contemplated locating the new drive-in on a site north of the Pennant hotel. Under the new arrangement, the firm will abandon the smaller drive-in, which was being constructed by Cecil and Roscoe Hopkins of the Hopkins Motor Sales Co., Lebanon, Mo., which they purchased a few weeks ago. Rolla thus will have only one drive-in, instead of two competing ones. The larger one planned by Carney and his associates will cost about $100,000.”

Then a front-page story in the Rolla Daily Herald on Aug. 18, 1950 helped explain why it didn’t open earlier that year:

“Recent heavy rains have slowed down the work on the new Rolla Drive-in Theater being constructed on Highway 66 between Rolla and Northwye by Rowe Carney.

“The drive-in, located on the south side of the highway in a natural amphitheatre, was smoothed down, and workmen were ready to apply gravel on the "floor,” but the rains made several ditches which will have to be filled before the gravel is spread."

Carney said he still expected to open the Rolla “shortly after Sept. 1.” The drive-in was to include “a big playpen for the kiddies” and chairs for patrons who didn’t want to sit in their cars.

Boxoffice, Oct. 10, 1953: “Photos of the Rolla Drive-In and the staff appeared recently in the Rolla News. Gene Parker, manager, said he was about to complete another good season.”

Boxoffice, March 22, 1971: “Commonwealth (Theatres) will acquire three theatres in Rolla … (effective) April 4: Uptown Theatre, Ritz Theatre, Rolla Drive-In and a drive-in theatre site … Completion of the drive-in remodeling, which includes addition of new equipment to serve the finest quality food and drink items, is slated to coincide with the opening of the 1971 drive-in season.”

Also via Joe Sonderman: “Rowe Carney would later buy the town of Arlington, Missouri for a resort that never was completed.”