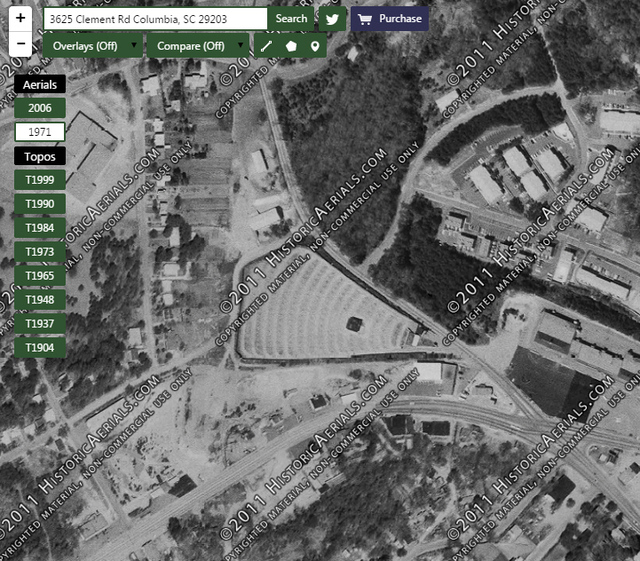 The Sun-Set Drive-In was a single-screen property located on a narrow wedge-shaped property north-northwest of downtown Columbia. It opened May 21, 1952 with James Stewart in “Bend of the River”. It was renamed Sunset Drive-In in August 1954. In April 1989 it went over to screening X-rated movies and was closed at the end of the 1987 season.

The property is currently the Central Baptist Church, and the only remnants of the drive-in are some parking rows that have not been paved over with the church’s parking lot.

This opened on May 21st, 1952 as the Sun-Set Drive-In. Grand opening ad in the photo section.

It also opened with a Tom and Jerry cartoon in “The Two Mousketeers” and a MGM “News Of The Day” newsreel.

The “Sun-Set” name lasted until 1955 when the name was correctly reduced to “Sunset”, although some papers recommend that name as early as August 1954.

The Sunset Drive-In ended its life at the end of the 1987 season, after screening X-rated films for a truckload of years since April 18, 1969.

Before the theater began running its longtime stunt with X-rated films, the last first-run feature the Sunset ran before flipping the table is Sean Connery’s “ThunderBall” which only ran for a week beginning on April 11, 1969.

The theater had a few incidents from here-and-there such as robberies, protesting letters, and even the manager, 26-year-old Michael Vassey, arrested from the Columbia Police Department in March 1975 due to the theater screening X rated films out into the public, and was later charged with violation of the state law later that first week of July of that year.

The theater did not close in 1975, it was still in operation even before and after incidents. The theater closed at the end of the 1987 season after screening X-Rated films for a truckload of years since April 18, 1969.