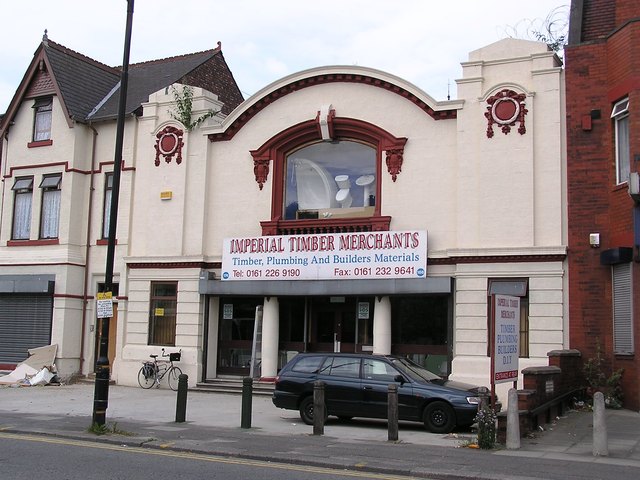 Located in the south Manchester district of Brook’s Bar at the corner of Chorlton Road and Moss Lane W. The Imperial Picture Theatre was opened in 1914. Seating was provided in stalls level only. It had a 5 feet deep stage and two dressing rooms. There was also a café in the cinema. Around 1929 it was equipped with a Western Electric(WE) sound system.

The Imperial Picture Theatre was closed on 15th January 1976 with Charlotte Rampling in “Caravan to Vaccares” and Jean-Claude Brialy in “A Murder Is a Murder….Is a Murder”.

It was converted into a timber merchants.

Operated by G B Snape’s, Snape’s Cinema Circuits of Pendlebury. Projection equipment was a pair of SUPAs, converted to argon lamps. The transport take-up was reversed, requiring a half twist on rewind. When I helped out there the bowden cable, cross connecting the projector shutters, had broken. Rather than replace it, the chief operator had rigged an alternative system across the insides of the box ports. This comprised a length of electrical conduit tubing, loosely supported in saddles. From this tubing hung two squares of asbestos. On the change, the tubing was grasped and slid sideways. Thus covering one port and exposing the other. Crude but effective. Instead of tabs, the proscenium had a ruched blind. Under the orange floods it looked extremely sumptious and much more classy than some other houses.