Located on Lower Roswell Road & Johnson Ferry Road. The Loews Twin at Parkaire Mall was opened June 28, 1974 with Jack Nicholson in “Chinatown” and Cybill Shepherd in “Daisy Miller”. A very nice theater built by Loews and only operated about one week before Loews left the Atlanta market. Later operated by Georgia Theater Co. and may have even survived until the sale of Georgia Theater’s properties to United Artists. It was closed on January 5, 1986. Demolished when Parkaire Mall was redeveloped. Spent most of its life as a discount house, a shame since it was such a nice operation that was never able to get going.

I went with my parents to see “Animal House” in 1978, when I was sixteen. They had a good time, I didn’t. I was cringing at some of the scenes knowing my mother was sitting next to me.

Does anybody know the name of the architect or firm which designed the original Parkaire Mall?

I posted the June 28th, 1974 grand opening ad in the photo section.

Great stories, that Billy Jack flick was a dog, we got stuck with hundreds of Billy Jack Hats at the IMPERIAL in Augusta,bet this twin had the same problem….

Growing up in Indian Hills, this was the theater closest to me as a kid. I remember seeing “Buck Rogers in the 25th Century”. This was also where I saw my first R-rated movie. It was the original “Friday the 13th”. I thought I was 13, but since it came out in May 1980, I must’ve been 12 instead. My friend and I were the ‘good kids’, so our moms had no problem letting us see our fill of gory/titillating horror movies of the early ‘80s. I specifically remember a triple feature of “Blood Beach”, “Humanoids from the Deep”, and a third movie I can’t remember…maybe “The Boogens” playing there one weekend. We were in heaven.

I remember this theater mainly for the ice rink around it. At the time, that was a novelty. We attended one of our Cobb County friends ice skating/movie party there- and there was nothing else around Parkaire at all. It was a strange little mall, with low ceilings and I seem to remember having to walk up a lot of ramps to get out but that could be my imagination. I do remember the popcorn because there was no place to eat in the mall and we were starving.

I only remember one movie I saw at this theater in the 70’s and if you saw this movie you only wanted to see it one time and one time only——————-Deliverance.

I grew up with this theater. I remember seeing “Star Wars” there numerous times, as well as a couple of different James Bond films, “The Terminator”, and countless others. It became the place to go for most local kids that moved into the area as it developed, on weekends and birthdays especially, until the Merchant’s Walk development sprouted up.

I remember that the interior of the mall was a 2-level structure, or was on one side at least, and for a short time, there was a restaurant/bar on the upper level, and not much else…don’t remember the name. I recall having a cheeseburger there one time, and thinking it was pretty good. A drugstore (Wender & Roberts?) and Hallmark card shop were focal points, as were a small video arcade and ice cream shop at various times. Seems there were always more vacancies than permanent businesses, however, which probably had something to do with why it was redeveloped. The mall also joined to the Kroger grocery store on the west end, which was the primary business in the area, at least early on, and is still there today (though long ago repositioned upon redevelopment).

The layout of that development was strange. There were several satellite buildings down on one end, past the Kroger store. Various businesses populated them at various times, including a dance studio, an auto service shop (which I think might still be there in some form…Goodyear?), and a small, dimly-lit pizza joint that didn’t last very long. They were arranged such that unless you knew what you were looking for and where to look for it, you would probably never know that most of those places were there. It was definitely not geared toward presentation, in terms of sight lines.

It always seemed to me that the cinema was on the wrong end. It seemed tucked away and hidden from sight from the main roads, and I often wondered how it did any business beyond us locals who knew where it was…I guess it didn’t, after all. Oddly enough, after the mall was torn down and redeveloped into a strip, they did the same thing with the ice rink, and moved it back behind the main development where you can’t even see it from the road. I don’t know how many times I’ve been asked by people unfamiliar to the area how to get to that place.

Thanks for the background, Stan. Interesting stuff. 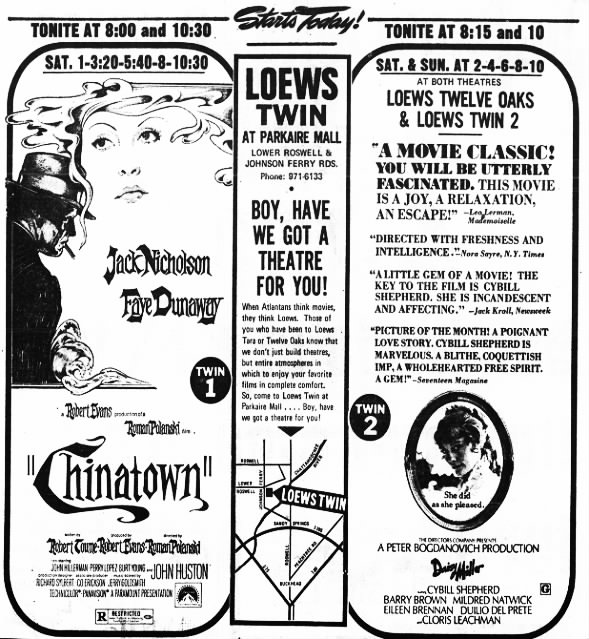