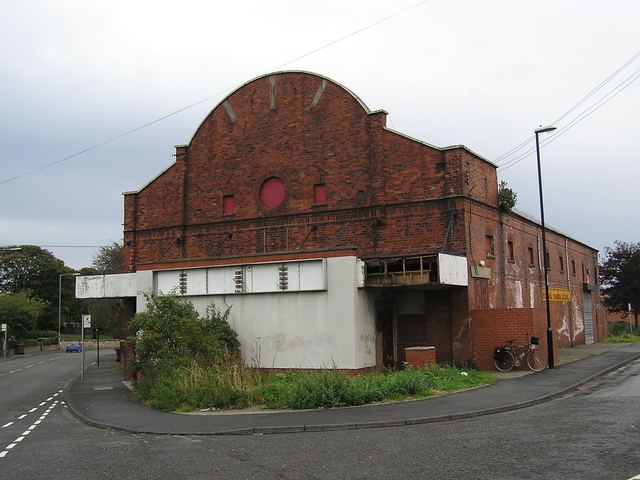 Located in Ryhope, to the south of Sunderland, County Durham. The Grand Picture Palace was opened prior to 1914. It had a stage and presented cine-variety. Around 1930 it was equipped with a Western Electric(WE) sound system and was re-named Grand Theatre.

The Grand Theatre was closed as a cinema in the 1960’s and was converted into a bingo club. This later closed and the building became a garage and auto parts store, which had closed by 2015. In April 2020 work began to dismantle the building which will be rebuilt at “Beamish, the Living Museum of the North” in Beamish, near Stanley, County Durham.

Great news! This 102 year old building is to be dismantled, brick by brick, and rebuilt as the centrepiece of a ‘new’ 1950’s town at the wonderful Beamish Open Air Museum, close to where I live. 600 good condition seats from the long defunct 1087 seat Palladium Cinema, Durham City (one of the ‘poshest’ cinemas in the North East at one time) have been kindly donated by Durham University as have 2 projectors from the same source (presumably, in the name of authenticity, Kalee 8’s, which the Grand had until Bingo took over in the 1960’s).

The projectors, by the way, whilst donated by the University, are not from the Palladium which had Kalee 19’s and they remain in situ in that now very decaying building.

3 minute video showing the Grand in its original location for the last time:–

So this historic building will be facing a much brighter future. What wonderful news. Hope everything goes well with the dismantling and transport.

Interestingly nothing yet has occurred on the stated project of dismantling and reconstructing this Cinema-Building to Beamish Museum. It now says that “the building is unsafe and not to be entered”. What do the teams of the Beamish Museum org expect a buildings condition to show up after a period of 15 months being vacant??

This doesn’t look good at all for a much brighter future of the “Grand” as stated to the public in February 2018 doesn’t it?

“Miracles Can Happen”! After over 2 years standing with no commencement of the promised “dismantle” of the “Grand Cinema”, Ryhope, work has started last month and the start point is on the removal of slates and the canopy. Having worked for some 3 years giving “Beamish” advice on the building and how it was in the 1950s, and together with member “Terry”, we made our views strongly known and “hey-presto”, work has started. It is hoped that I may be able to forward photos as the stages progress! Once the building is situated at “Beamish” it will represent a cinema of the 50s and show films and possibly newsreels of that period in time!