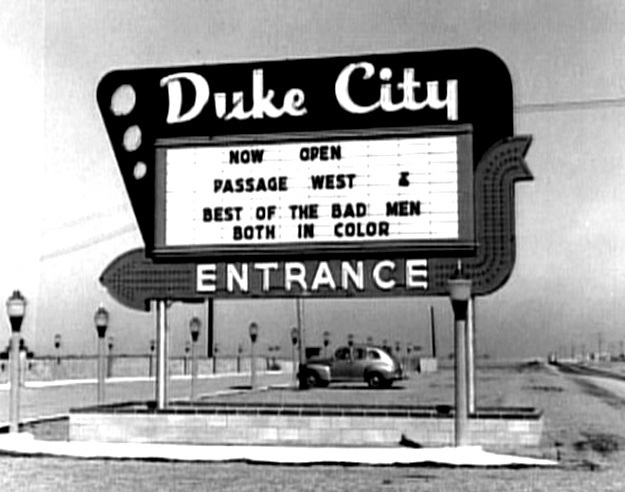 The Duke City Drive-In was opened February 17, 1953 with Robert Ryan in “Best of the Badmen” & John Payne in “Passage West”. It was built by Tom Griffing Construction, and was a single screen initially operated by Tom Griffing. It was later operated by All-State Theatres and Video Independent Theaters Inc.

This opened on February 17th, 1953. Its grand opening ad in the photo section.

A closer address (at least for Google) is 2701 Carlisle Blvd NE, Albuquerque, NM. Currently, a Wal-Mart sits on the property with no trace of the drive-in remaining. http://tinyurl.com/j7uvc7p

Why the name Duke City?

Boxoffice, Feb. 11, 1963: “Video Independent Theatres has purchased the Terrace and Duke City drive-ins in Albuquerque. The same organization also has taken over the Wyoming Drive-In, also in Albuquerque”

davidcoppock, I found your answer:

“The city was named for the viceroy of New Spain from 1653 to 1660, Don Francisco Fernández de la Cueva, the Duke of Alburquerque. The first ‘r’ in the spelling of the title was subsequently dropped, but it’s named after a Spanish duke, thus ‘Duke City’.”

The title photo is fascinating in that the marquee is an exact copy of Fort Worth’s Parkaire Drive-In Theatre, with just a few minor exceptions! The Parkaire opened a year before the Duke City, and the marquee’s colors was a dark green body with a golden yellow arrow. Would anyone here know or remember the Duke City’s colors? Thanks, all!