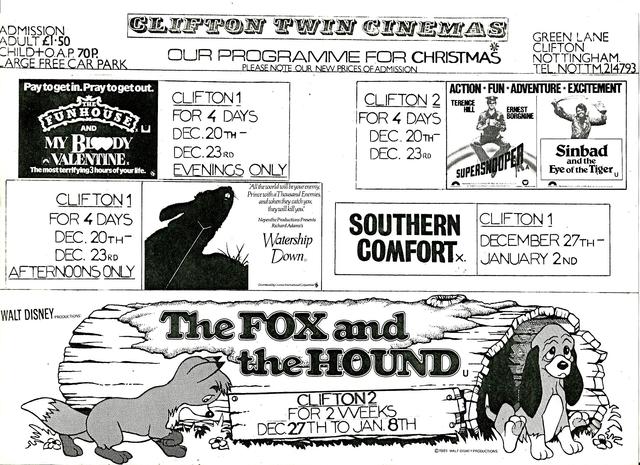 Opened by the Barry Noble Organisation, the Sun Valley Leisure Centre opened 7th August 1980, in the Nottingham suburb of Clifton. The building contained an American Pool Hall with 11 tables, the J.R. Bingo club on the upper floor and the Clifton Twin Cinema which had a combined total of 250 luxurious seats. The opening films were “It Shouldn’t Happen to a Vet” and “Monty Python and the Holy Grail”.

I was living in the area at the time, but I only attended one film show: a horror double bill of “My Bloody Valentine” and “The Funhouse”, on Sunday 20th December 1981.

The Clifton Twin Cinema closed on 4th December 1982. The Sun Valley Leisure Centre was still active, though not on films, when I revisited in August 2001.

The Sun Valley Bingo Club (as the Centre was by then known) closed in the summer of 2009. The building stood derelict for several years before being demolished in 2013 to make way for an extended car park for the adjacent Morrisons supermarket.

The twin cinemas in Clifton opened on 7 August 1980. They each seated only 125 people and were not financially viable. They closed on 4 December 1982. With acknowledgement to Graham Woodward.