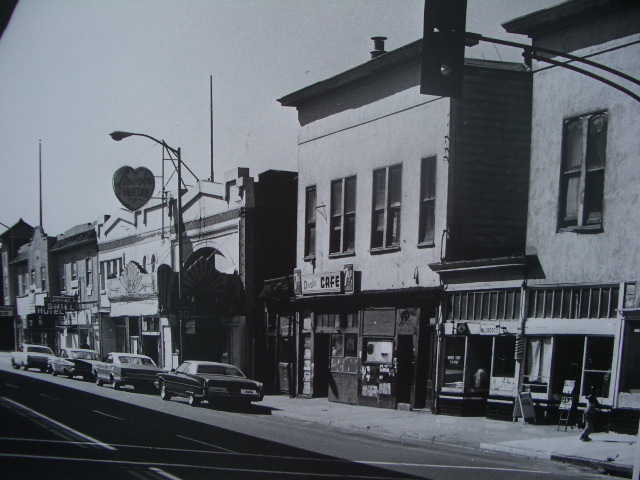 The Lincoln Theatre was opened in 1921, and operated until at least 1955. It was operated as a negro theatre by Joseph and Elizabeth Freeman.

Sadly, the Lincoln Theater is no more. Vacant and abandoned for years, it fell victim to a roof collaspe earlier this year, apparently due to years of neglect, and was subsequently torn down.

The Lincoln was originally a theatre for black audiences.
When I lived in Oakland in the early 1980s during college, I remember seeing the boarded-up theatre’s stucco facade and fly tower clad in rusting corrugated metal from the BART train, near the West Oakland BART station.

Over the history of film exhibition. There were theatres that were called negro theatres. That served the Afro-American population in this country. At one time this theatre was listed as one of them.

The Lincoln was a very popular house for the West Oakland residents. It was well maintained and very clean. The Lincoln was a church for many years, the pastor always leaving the side exit doors open to allow air inside as the mold buildup was incredible. The Lincoln always showed two movies. Admission was $1.00 for general, and $1.25 for loge. Patronized by drunks and drug addicts, management didn’t care as long as they made enough money to pay for the lease. Many customers were allowed to sleep the night after closing time, regulars who did not have ahome to go to. Sleepovers were kicked out at 5a.m. to allow cleaning. Esther’s Orbit Room, a bar and bbq, always made sure that coffee was available. Back in the day of extreme prejudice in Oakland, where blacks could go to the T&D and allowed to sit only in the last 15 rows of the balcony, the Lincoln was the only theatre where you could see a movie, and be treated with respect. The Star Theatre had the same policy. A well maintained house, with features catering to the black audience, it is sad that this building could not withhold the years of time, and collapsed. There was a very brief meeting with the Oakland City council to restore it, but was scrapped due to funding.