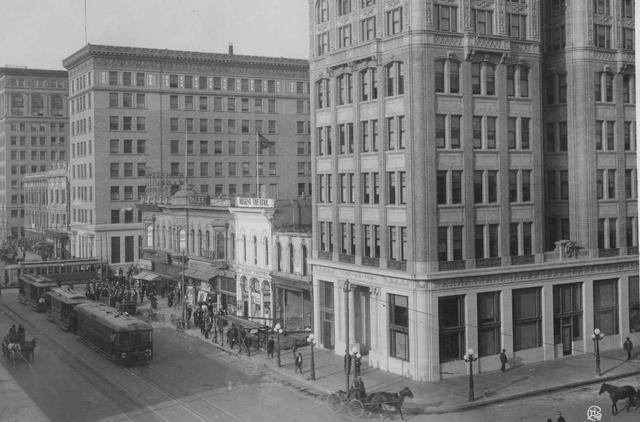 The tiny Regent Theatre was built in 1913, was renamed the Newsreel Theatre in 1941, and was subsequently known as Peerlex Theatre, Art Cinema, and most notoriously, as the Pussycat Theatre until its closure.

In the mid-1990’s the long-closed theatre was quietly demolished.

The aka line at top says “Peerless” instead of the “Peerlex” seen on the vertical sign in the photo ken mc linked to and in this mis-dated photo from the Oakland Museum’s collection. Is that a mistake or was “Peerless” also the name at one time?

Here is a May 1970 item from the Oakland Tribune:

The Oakland City Council last night refused to issue a business license to a downtown theater which specializes in “adult” films. Backing up its staff, the council declined to give a license to Pussycat Theaters Inc. to operate the Art Cinema Theatre at 1118 Broadway. City Hearing Officer George Dini said the denial was based on seven arrests in the theater of men charged with lewd conduct in the theater while watching films. He also claimed the theater had a “buzzer” system warning employees when police officers arrived to check the audience.

An attorney for the firm, which operates 14 such movie nooses in the west, said the council’s action violated the First Amendment. Its owner, Vince Miranda, said he will appeal the council action. He also told the council that he was a native Californian and religious. Mayor John H. Reading asked Miranda, “You don’t hold any Scout merit badges, do you?” Miranda did not reply.

Sorry, that should be movie houses, not nooses. I missed that one.

I hit the preview button about six or seven times to fix the typos, but I missed that one.

This site has a 1980 photo of the Pussycat Theater:
http://tinyurl.com/dec55w

One night my friends and I took the bus downtown to go see My Fair Lady. We stopped at the Doggie Diner on Broadway for a burger, and noticed that the Art Cinema was playing “My Bare Lady”. None of us saw a adult film before, so we decided to go. The ticket lady asked us if we knew what was playing inside, she checked out our id’s and we went in. We were the only women in there! We found seats upstairs, and when we all sat down, all of a sudden men were starting to sit behind us, in front of us, and a few in the aisle that we were in. Many were in the military. We got nervous, got up and left and on our way out, the ticket lady laughed at us.

Since my hobby is studying historic theatres, I went into this Pussycat Cinema around 1980. In all I patronized nine Pussycat theatres from San Diego up to San Francisco. All of them had flashy facades, and the lobbies were clean, but the dim auditoriums were rundown and dirty.

1953 photo at the Peerlex posted via Brandon Djb Barlow‎. Possibly from the previously posted but now dead link.