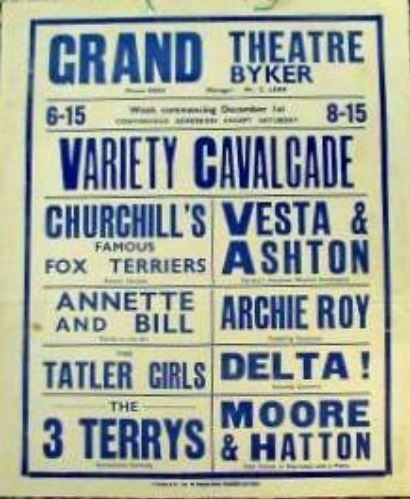 Located in the Byker district to the east of the city centre. The Grand Theatre was built for William Watts and opened on 27th July 1896 with F.R. Benson’s Company performing William Shakespeare’s “The Taming of the Shrew”. It was designed by Newcastle upon Tyne based architect William Hope and had seating provided for 2,226, in orchestra, dress circle and gallery levels. Interior decorations were arried out by Dean & Co. of Birmingham. The proscenium was 30ft wide, the stage 40ft deep and there were 14 dressing rooms. In 1899 Downey’s Living Pictures were presented here. By December 1908, Bioscope shows were being screened prior to the beginning of the live show. In 1910 it was granted a Cinematograph Licence, but a permenant projection box was not installed until 1913. This was located in the 400-seat gallery seating area, which was closed off to the public and the theatre seating capacity was reduced to 1,826.

On 14th April 1930 it was equipped with a British Talking Pictures(BTP) sound system and the first talkie to be screened was Sophie Tucker in “Honky Tonk”. In 1935 it was taken over by the E.J. Hinge Circuit and the soundr sytem was changed to a British Acoustic(BA) Duosonic system. The Grand Theatre closed as a cinema in March 1936 with Will Hay in “Boys Will be Boys”. On 9th March 1936 it became a live theatre once again. With the oubreak of World War II in September 1939, the Grand Theatre went back to full time cinema use from 9th October 1939 playing Bing Crosby in “Pennies From Heaven”. It played its final fim Dick Powell in “The Singing Marine” on 17th March 1941. The Grand Theatre became a variety theatre once again, with the 400-seat gallery seating area re-opened.

The Grand Theatre was closed on 27th August 1954. The interior of the building was gutted and was used as a builders supply store until it was demolished in April 1964.